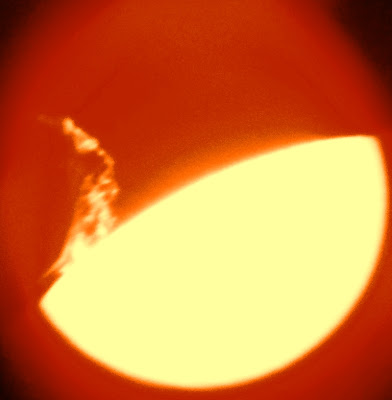 Hi this is the first blog of 2011. It must have been the rotten weather so far this year that has made me lethargic.
Anyway this weekend we were helping the Beaver Cub groups of Ashford (and surrounding areas) run a 'Star Party' This involved demonstrating The size of the solar system in the grounds next to the venue. You give each child a planet and send them off down the field to a distance relative to that planets distance from the Sun. Its all good fun! I gave this one Beaver the planet Uranus, and he shouted out 'Ooh I know a good joke about that!" After a good giggle his leader recommended he save it for later! Another one apparently farted in the astro-dome, so his leader said I should give him a gas giant! he was given Neptune.
We had the Solar telescope set up (note You must NEVER View the sun through any other telescope or binoculars - You WILL go blind) and I managed to photograph a huge solar flare (see pic) That was my highlight of the day. We also set our normal telescopes up on distant chimney pots. I always find the young'uns ask the best questions, including 'If there a black holes, are there white holes as well?' Maybe in a parallel universe!
All respect to the beaver group leaders, what I found was that if you took your eye off them, they would soon wander off. It was really like plate spinning!
Since being involved with the society, I have found that kids are fascinated in space and astronomy, something that I'm sure wears off as they discover things like gaming/music/fashion/members of the opposite sex. But if we manage to keep just a few interested then our hobby will keep going and we are building foundations for the scientists of the future. Mind you I think Prof. Brian Cox may also have something to do with it!
Until next time!
Posted by Steve Jackson at 20:53 1 comment: