Friday night was astronomy night. Yet again it was cloudy but the evening went well. I gave the introduction and Dr David Mannion gave a good presentation. We had to shoot off quickly afterwards because we had promised to call in on a friend who was having a 'Birthday Soiree'. In the process I left my keys behind, and we wouldn't get in without them. Luckily someone kept them for us and I collected them on the way home.

My hair needed cutting, so after the weekly shop we headed off for Tenterden. As we drove through High Halden I noticed a sign outside a shop offering Dairy Brewery Beer, three for a fiver. I made a note to call in on the way back. Tenterden was rammed, we had to park down at the railway station. After getting the ears lowered we had lunch and a mooch around the shops. We stopped at friends on the way home (High Halden) for coffee and a chat. It also gave me an opportunity to get some beer.

Tonight we had Asda Curry, then settled down to watch the new Dr Who series. I enjoyed it. The new assistant shows promise, and the story was ok, even if it was slightly updated from a previous David Tenant episode based in the fifties. I noticed it was clear outside so I decided to have a look for that elusive Comet. after scanning the relevant part of the sky with binoculars, I noticed a slightly elongated smudgy object. Comet PanSTARRS has now been spotted by me. 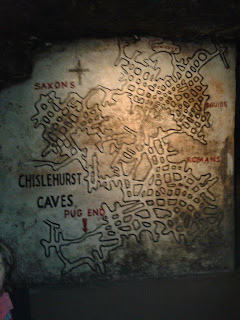 Today we had planned to visit Chislehurst Caves. As there was only six of us going Manky offered to drive us up in his seven seater. We arrived at the meeting point, a layby at the top of the road and met another of  the group. The weather was awful. It was blowing a blizzard of icy bits. Our phones buzzed. Manky's car wouldn't start and Tina's car had a flat tyre. Myself and Lisa stepped in and soon enough we met up and set off in convoy. We arrived at the caves with about 45 minutes to spare before the next tour. As we were with a load of Geocachers it would have been rude for them not to find one. Surely enough there was one hidden in the car park.

The tour was great. You spend about fifty minutes down there. There is one point in the tour where they take the hurricane lamps away from you, to demonstrate how dark it is down there. It is pitch black. Back up at ground level, we went to Petts Wood for a Wetherspoons lunch. We met up with our friend, Jackie and had a good chat over drinks and roast beef. (well some of us had roast). It was soon time to leave. I enjoyed today. It was a good recovery from an abandoned (by us) Smarden Duck Race. We watched the boat race (Oxford won) then caught up with stuff we had recorded over the past week.
Posted by Steve Jackson at 20:12 No comments: