Hi all! well its been a very busy past couple of weeks! saturday 21st we were invited to a 40th birthday party with a difference. The theme was Tudor so the birthday boy dressed as Henry VIII and we were his minions! A great evening was had by all! The next day I had to go & do the DWR show. considering the way I felt sunday morning I did surprisingly good as well!

No show over the bank holiday because of myself & Sarah host a BBQ for our families and local friends. But DWR broadcast my debut show so I had the chance to listen in.

I've just started backing up some of my 12" singles onto CD so I'll be playing a couple of rare ones on the next show....

Don't forget Sunday 4pm to 6pm is the place to be on www.dancewebradio.co.uk

Posted by Steve Jackson at 19:13 No comments: 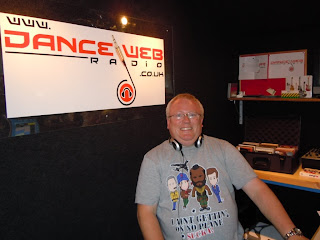 Facebook is a great way of networking with like-minded people. I have always been into soul music, I bought my 1st 12" single in 1978 (Evelyn "Champagne" King: Shame) and my collection grew until the mid-80s when a new wife & house curbed my record buying. I didn't resume again until I started Hospital broadcasting. Anyway, I am friends with a couple of DJs from back in the day. One of them asked me if I was interested in a new internet radio station that was being launched. Now a few weeks later & I have a sunday afternoon slot on a great station. http://www.dancewebradio.co.uk/. The first show was last week, and it was brilliant (if I say so myself) at one point the owner (John, a great guy!) came running into the studio with his thumbs up "that tune is brilliant, I must dig it out!" His tea & Vimto is most welcome as well!

I think this station is going places. We have a great line-up of DJs and bags of enthusiasm. All we need now is sponsors!

The next show is sunday 22nd 4pm until 6pm and what I'll do is post the previous weeks playlist for the world to see!

DONALD BYRD LOVE HAS COME AROUND

CHANGE - YOU ARE MY MELODY

CANDI STATON - WHEN YOU WAKE UP TOMORROW

NORMAN CONNORS - TAKE IT TO THE LIMIT

THE DELLS - ALL ABOUT THE PAPER

NED DOHENEY - TO PROVE MY LOVE

GQ - MAKE MY DREAM A REALITY

MYSTIC MERLIN - JUST CAN'T GIVE YOU UP

ARCHIE BELL & THE DRELLS - DON'T LET LOVE GET YOU DOWN

HERBIE HANCOCK - I THOUGHT IT WAS YOU

DEBRA LAWS - ON MY OWN


LISTEN IN NEXT SUNDAY 4PM-6PM FOR MORE OF THE SAME!

Posted by Steve Jackson at 19:48 No comments: