Its been a while since I last Blogged. I was having a look through my previous few posts and they all said roughly the same thing. Apart from my 50th nothing much has happened since Easter.

Earlier this year I was offered a special gift for my 50th Birthday. Either something like a meal on the Kent & East Sussex Railway, or an overnight stay at Livingstone Lodge. I decided on the Port Lympne, Livingstone Lodge as I had already done the K&ESR a couple of times. We invited our friends, Andy & Julie as they had expressed an interest, and we booked it for 16th May. 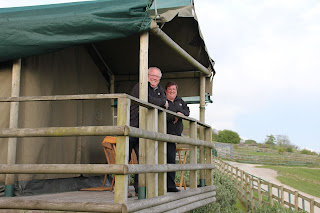 Andy & Julie turned up in the morning, and after loading the car we set off for Lympne. First stop was lunch at Boltophs Bridge Inn in West Hythe. After a nice Ploughmans and a couple of Doombars it was time to head to the Park. We arrived about 30 minutes too early so we were told to have a wander, grab a coffee and report back at 4pm. At 4pm we were greeted by our guide, Andrew and offered either a glass of Sparkling wine or an Amarula, which is like a fruity Baileys. It went down quite nicely. We boarded the truck and our luggage was taken to our tents. The drive around the park lasted just under two hours and Andrew gave us a running commentary about the animals we saw. It was really interesting. We arrived at the camp and were put in the two tents closest to the Laapa (the place where we eat) but they were furthest from the toilet/shower block. The tent was excellent. Large, heated and with all the things we needed, toiletries, dressing gowns and slippers. We sat out on the veranda looking out over Romney Marsh and out to sea. The wind was a tad chilly, but when the sun set so it did subside. Before we went to  dinner I was sprung my first surprise. Sarah had paid for me to have a Tapir experience. I was to get up close and personal to the beasts.

We strolled over to the Laapa for a drink before dinner. There were some nice smells coming from the Fire pit in the room. A huge hunk of fillet steak was cooking on there. We were seated and helped ourselves to starters, very nice. In between courses a Giraffe turned up for a feed. The staff gave it some bread which was gobbled up. Then we queued for mains. The steak was the best I have ever tasted, along with Scallops, Chicken and various veggie dishes it was a great meal. Then the second surprise turned up. A birthday cake and the staff singing 'Happy Birthday'. We were all too full to eat cake so it was put in the fridge for later. We rounded off the evening with a dessert, coffee and chocolates. We gave the cheese and biscuits a miss. Andrew chatted to us about his experiences in South Africa and UK. We retired about 10.30pm, bellies full and feeling tired. 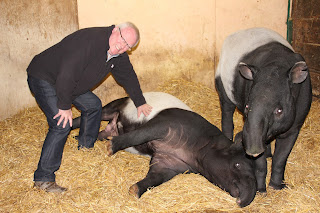 It wasn't too warm in the night, although it was bearable with the heater on in the tent. Dogs howling and barking woke me about 4am, and I slept restless until 6.30 when I really needed to use the loo. I put my head outside the tent and there were two Rhino walking past. Then, as the water hole was right below our location, Wildebeast started gathering, as well as Elan. The shower room was good. Very clean with plenty of hot water. We dressed and made our way to the Laapa where the coffee was on (good) and Breakfast was about to be served.
The trip back to reception took about 30 minutes and again we saw a few beasts. Then Andrew drove us four down to the Tapir enclosure. Chris, the Keeper allowed all of us to go in and see the Tapirs. They love having their tummys rubbed, and will lie down with their legs in the air while you rub away!
I found them fascinating, they are very docile although they do bite, especially around feeding time.
We were led out to the outside enclosure, where Chris showed us a trick. He would whistle to them, and they would whistle back, brilliant!

We said farewell to Port Lympne and headed for Howletts. They knew we were coming and let us in no problem. We made it as far as the Gorilla enclosure where one of the keepers was giving a talk. We were suddenly overcome with exhaustion, I don't think any of us slept well last night. so after an hour at Howletts we headed for home and an afternoon nap.

I can honestly say I had a great time, with great friends and I would recommend the Livingstone Lodge experience to anyone. It was a fantastic two days.