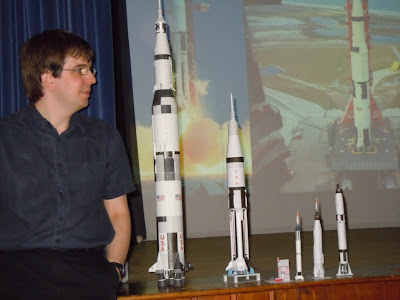 Friday night was the monthly meeting of the Astronomy Society. The guest speaker, Jason, gave a brilliant talk about 50 years of manned space flight. There was humour, pathos, huge amounts of detail and even props! All in all a brilliant talk. The hour and a half went really quickly and he had the audience enthralled.
Next month it's my turn. Back in 2009 I put together a weather satellite receiving station for 'Astrobash' which was the AAS contribution to the year of astronomy. I thought it would be a good idea to present a talk about the project, including it's origin and also a practical demonstration. Then our chairman publicised it as 'Space Weather' so I had to change the goal posts slightly, I am now giving a weather forecast for the planets of the solar system, plus an up to date solar weather forecast. I need to time it with a weather satellite pass as well, which I won't know until the day. All I do know it will be difficult to follow the last two presentations, which have been excellent!
I went back to Dartford Town Centre on Saturday. Now I normally go to Darent Valley Hospital once a week to do my Radio show there, but I never venture into town. Sadly, the Town is a shadow of its former self. The recession has hit hard with a lot of vacant shops. Plus I think Bluewater has really taken a lot of trade away from the town, with all the big retailers moving out. Even the 'very' camp (and funny!) waiter in the cafe has left! I met my cousin saturday night who was down from Nottingham. He had his new girlfriend with him. A really nice person. Anyway we all ate way too much chinese food and had a few drinks to wash it all down. A good evening, its not often we have a family get-together.
Sunday was normal. Get up slightly late, trip to Dobbies, lunch courtesy of McDonalds, Do bit more to the outside electrics then off to the studios of Dance Web Radio for the Soul show. We rounded of the evening with the latest Harry Potter film, Blu-Ray as well. What makes me smile is the surround sound always make the cats jump!
Posted by Steve Jackson at 09:24