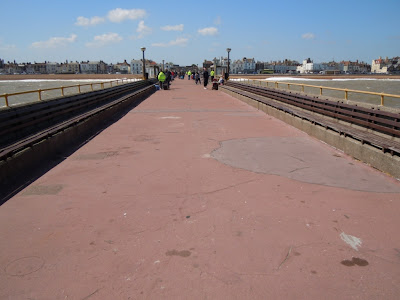 I was going to put today's activities in the previous blog, but I've decided to give this topic a blog posting of its own because I'm gonna have a rant, I feel I need to get this off my chest, I deserve it its been a long time since I last had one!
Basically if there is one thing that really gets my goat it is.....POOR RESTAURANT SERVICE!
Today Sarah and myself went to Deal. I must say it was very blustery down there, so we didn't spend too much time walking along the seafront. As it was just on lunch time we decided to have a meal then, rather than wait until the evening. I always wanted to try the restaurant on the end of the pier (I won't name it on here but you know the one if you have been to Deal recently) . We duly walked in, I asked to look at a menu as there was nothing on display apart from the specials. Only to be told "It is waiter service, take a seat and someone will serve you"......5 to 10 minutes later, still no menu. Then a group sat down next to us and were served straight away. I ask the waitress if there was any danger of seeing a menu (my words exactly) and was told "sorry I didn't see you come in". Hold on...She was the one who told us to take a seat...anyway they were quick to take our order, fish & chips twice, one coffee, one water. The drinks arrived soon enough and my cappuccino was not too bad. 50 MINUTES LATER Our food arrived and to be honest it was good, but we had to rush it as there was not enough time on the parking ticket. Now it wasn't too busy,even though it was lunch time but how long does it take to cook this? In the past if food has been delayed normally the staff have the courtesy to tell you and even offer some more drinks on the house or knock a few quid off the bill, and I have been satisfied with this, but they were oblivious to the delay so obviously this was the norm. Frankly in this day and age this level of service is unacceptable.
I can see why restaurant chains are so popular. You know what you are going to expect from your food, and the level of service is generally good. It also explains why a number of badly run restaurants go under. I think there a a few things they could do to improve service. Either reduce the amount of things on the menu, or take on more kitchen staff. There were plenty of service staff there.
This afternoon we drove over to Lathe Barn, a few miles from Port Lympne. Whilst there we went into a small junk shop (I like looking at tatt). One thing that did catch our eyes were a collection of First Day Covers at a pound each. Sarah bought some wildlife ones and I bought 3 RAF ones. I think they will look good framed. there was a cafe there but after our experience at Deal we decided to drive the scenic route home and have a cuppa there!
Posted by Steve Jackson at 19:47