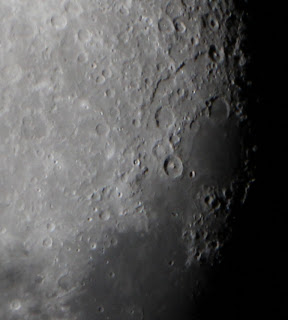 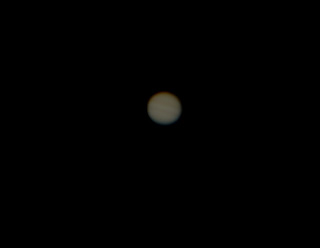 I bought our telescope and a T-ring in 2009, and friday night was the first time I had connected my SLR camera to it. OK it was only a few moon shots but I was impressed. We had some friends round that night for a chat and chinese food, so about 9pm myself and Andy went outside and left Sarah & Julie to chatter. After a few shots of the moon we turned our attention to Jupiter. sadly the pics weren't as good, even after stacking. The moon was a little too bright and the clouds were rolling in, so you could just make out 2 cloud bands on the Planet (see pic) 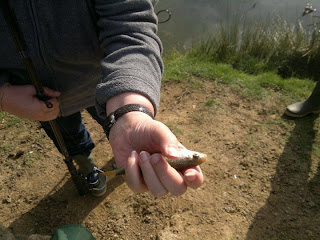 Saturday we had planned to go fishing to try out our new tackle. We met up with Dave who led us to the Coldblow pond. Luckily the weather had improved, when we left home the rain was torrential, and we had even bought a brolley along with bait from the angling shop. Apart from strong winds the weather was ok at the pond, but having not prepared a line for years it was being blown all over the place and it took me about 30 minutes to set up mine and Sarah's line. I caught 2 Perch and 1 Roach, Sarah caught 1 Roach and Dave bagged a 5lb Common Carp using float legering and German sausage. A good afternoon was had by all. After stowing away the gear and brushing down the sheep poo and munge off our clothes we settled down with a KFC and an evening of TV.

Sunday was really spent doing all the usual things, Shopping first thing, preparing beef bourgignon for the evening then off to Dobbies for our monthly free coffee and a toasted sandwich. Interesting, I bought a bottle of red wine in Asda this morning, 2010 Stellar Organics Pinotage reduced to £3.75 I saw Stellar Organics Wine in Dobbies for 9 quid a bottle, I think I may go back to Asda tomorrow & get some more! Then it was home for some show prep and then off to Dance Web Radio for my show. On the way home I thought I would be stuck on the M20 after an accident closed it. But luckily I was near the front of the queue and I was only waiting for about ten minutes. It could have easily been hours!