When I grow up I want a Harley!

Greetings from Birmingham! Well Sutton Coldfield actually but its near enough and it is the posh bit. The reason we are here this weekend is two fold. First to visit Sarah's parents and secondly to go to Motorcycle Live at the NEC.

Guess what, I use my Tomtom sat nav for only the third time and it packs up....A trip to Halfords is in order. I am most dis-chuffed as I may have needed it for the journey.

Friday night we took a trip to the Balti Triangle, and area of Birmingham famous for it's curry houses. The traffic around Alum Rock was a nightmare, we only arrived by the skin of our teeth. Anyway the meal was superb, my chicken Balti was good, as was the family naan which three of us shared. Maybe it was too much because I was absolutely stuffed, but Andy polished off his meal including a veg dish, Julie's salad and ate a fair proportion of the naan as well. The guy has hollow legs!


Saturday morning Andy, David and myself drove down to the NEC whilst our respective 'other halfs' went off to Birmingham city centre for some retail therapy. We arrived and parked in Birmingham international station (only £5) and took a short walk to the NEC where we parted company with David who took the train into the city. As we walked into the Entrance we were greeted by the ladies on the Carole Nash insurance stand....That put a smile on our faces. The thing I liked about the different manufacturer's stands is that you can sit on all the bikes to try them for size. I particularly liked Harley Davidson (see pic), they seemed to fit me like a glove. I can see why many men in their mid life crisis opt for a Harley. A quick pit stop for chips and yet more freebies then we managed to catch up with Andy and Dave from Dexterity in Ashford, who were there helping on the 'Get On' stand which introduce people to motorcycling. The guys said they had never been so busy, with plenty of people having a go on bikes that have never ridden before. By about 3pm I think we had seen nearly all of it and collected a few freebies on the way. I took this photo but the trouble was there was a lady sitting on the bike.....oh well!
Back to Sarah's parents for a lovely dinner, then we spent the rest of the evening playing Uno and Cards. 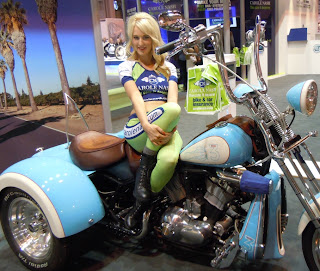 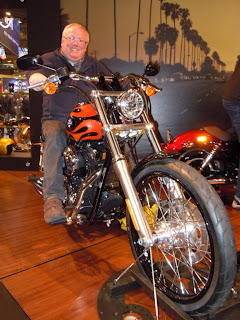 
It was travel home day today so we didn't really do much, It was a lazy Sunday morning when I just watched some iPlayer stuff on the iPad and read a magazine. After yet another lovely dinner (I need to walk this weekend off!) we packed the car and set off back to Kent. The journey took about 3.5 hours and apart from a white van moron pulling out on me on the M20 it was a fairly uneventful  trip. Until next weekend then.......