Not in the Christmas mood....yet.

Normally, the first Saturday in December is spent getting the House Bling set up. However no-one in our Close has, and I really can't be bothered today, so that's a task for next weekend. The morning was spent in town, paying a few bills and buying a few odds and sods. Then it was off to Halfords to change our sick Sat Nav. I have been frantically searching for the receipt but it has disappeared, but I have found my credit card statement. That was good enough for them. After a quick call to Tomtom the manager agreed to give me a new one, which was a pleasant surprise bearing in mind what they told me before. Last weekend the sales assistant in Birmingham told me they only send them back for repair. Then I was told that you only got a replacement if the unit was less than 28 days old. So its obvious Halfords need to train their staff to 'sing from the same hymn sheet'!
We visited Sarah's Nephew and girlfriend who have just taken possession of a new flat. I helped shift a sofa inside which involved taking the front door off, not exactly an easy task. Anyway it went in OK. Then we popped into our friends Dave and Tina to pay for some theatre tickets she had got for us. After a coffee and a nice chat it was then off to Asda to get some dinner. We have an extra mouth to feed tonight as Sarah's dad is down.
I know I'm a 40-something but I've just bought a train set! It was so cheap on Amazon that I couldn't resist it. It was over £100 at the National Railway Museum, and with a discount voucher from Topcashback it came to £35...I now need to sort the loft out. What a kid I am! Nothing doing tonight, so its another Saturday night in watching  'Strictly Come Dine With X-Factor Get Me Out Of Here On Ice' 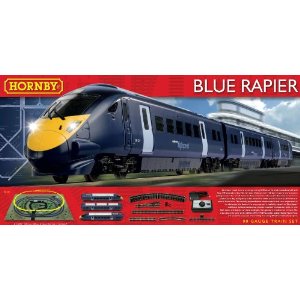 I didn't sleep too well last night. Apparently I had restless legs which also kept waking Sarah!
Anyway we didn't sleep in too late so we were at Asda by 9:45.  After the shop we went round to our friends Jason & Tina, to drop a card in and to meet their new addition to the family. Nathaniel, bless him showed his appreciation by sleeping all the time we were there, including whilst Sarah held him, but he had just been fed. Apparently he is a night shift baby, hence the parents looking a tad tired this morning....

Being Sunday meant I had a trip to Dance Web Radio for my show. The drive down was interesting, I nearly got taken out by a car who panicked when a lorry came up behind her in the speed restriction and nearly crashed into me. Then on the way back in the same  place a car who obviously doesn't know what 30 MPH means overtook me and will be getting a nice Christmas card from the Kent Police after getting flashed. Anyway the show went well, and I enjoyed slamming on the vinyl as well!