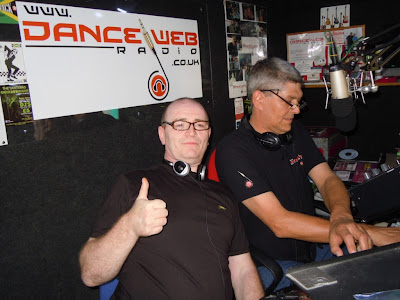 I can't believe it has been one year since Dance Web radio went on air. I was there on the first weekend, and along with my fellow presenters we still have the same line-up, along with a load of new additions over the year. I think its a testament to the way the station is run that we haven't lost anyone. We popped over to Dobbies in the morning for our free coffee and also picked up a cactus. It seems to be the trend amongst us at the moment! Then it was off the DWR central for a bit of a do. I did one hour on air, had a drink and a chat then left about 5pm to get back home for a meal with Sarah. After much deliberation we decided to head to Cinnamon Spice for a nice curry .

Sunday we went over to my brother's place to collect my Oz cousin. Then it was off to the parents for sunday lunch. We let her have a little afternoon nap whilst Sarah & I went to Bluewater to buy a new lens for the camera. After waiting what seemed an age in the shop, which was hot, busy and had spot lights that just shone in your eyes like some sort of interrogation method, we were told they were out of stock but did we want the display one. Based on the amount of dust and crap on the lens I declined the offer so its off first thing tomorrow to the store in town.

We got back to Ashford and after a bit of food shopping headed off to Dungeness. Regular readers know I like this place and my Oz cousin loved it (well I hope she did!). Then it was home for cheese toasties and TV!