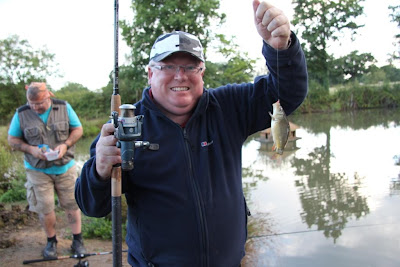 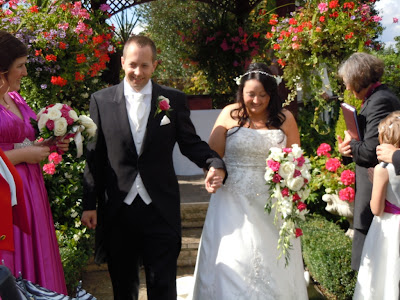 Before you ask, no the common word is NOT tackle!

Saturday we went up to Higham as guests of our Friends from Valley Park Radio, Mike & Debbie who were tying the knot. The day before Sarah had bought me a new shirt for the occasion, but it had a double cuff, and I had no cufflinks. So it was off to the outlet first thing to buy some, which I did along with a new pair of shoes.

We arrived at the venue to meet the groom and best man, Neil. I have to say Neil looked more nervous than Mike. Anyone would think he was getting hitched! We met up with the other VPR guys who had been invited and made our way to the gardens.

The weather was very changeable. and it was pure chance that as the outside ceremony started the sun came out. Then as they were signing the register the heavens opened and we all took cover, then it stopped raining for the wedding photos. After a very nice meal, speeches, a few drinks, chat, more food and more drinks it was soon late so we left about 11:30pm.

Sunday we had been invited to 'batcamp', an annual event at a friend of a friend's farm in Smarden. We arrived about mid-morning and they obviously had a good night as they were just tidying away breakfast. We started with a beer and a nice game of poker, where Sarah took us all to the cleaners. Lucky it was only poker chips. After lunch of bread & cheese, plus some pie and sausages that I doggy-bagged from the buffet last night, we made our way to the pond for a spot of what Manky calls 'tiddler-bashing'. I haven't fished for about 15 years, so I needed help and after about 2 hours, including losing my tackle in a tree and tangling about 2 sets of hooks and floats. I finally bagged my first mirror carp (see pic) . Jason was on zero as well until Lukey helped him, then the fish started landing. We actually bagged 7 a piece. I could get into this fishing lark!

We packed up about 7:30 pm and made our way back to camp for dinner. Then the evening was rounded off with bit of Bat detecting and a sit around the camp fire making farty noises with our iPhone apps, except Manky who produced the genuine article. We were also subjected to really clear skies, the second time this weekend I've seen the Milky Way in Kent! We had a fantastic day there and can't wait for the next time!