Today is the day we pick up the second car. So after going into town to draw the money we set off to the garage. I don't think they were expecting us until later because they reckoned we said we would be there at 4pm. Er no. Anyway everything had been sorted and the car was ready to go. We decided to give it a little shakedown so after lunch we took it down the M20 to Junction 11 with the roof up then back up the A20 with the roof down. Everything seemed OK but we have found a few issues which need sorting.
The newly fitted indicator stalk is intermittent. The wheels need balancing, there is vibration through the steering wheel at speeds of 70mph. We had a brief warning display about the 'Antipollution System' That could be a dodgy connection to the one of the sensors. Oh and the aerosol tyre inflators are missing. We need them because there is no room for a spare wheel in this car. 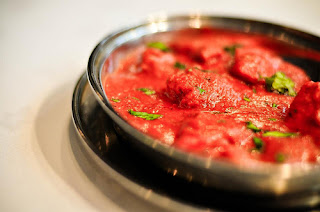 I was awake early this morning which always seems the case at weekends so when we got home I felt tired and nodded off for half an hour in front of the TV. Tonight we have some friends from the hospital radio coming down for a curry and a catch-up. We are staying local, the restaurant is within walking distance. I must admit the food hasn't really improved since the last time we went there, about four years a go. If you want no nonsense average curry then this is what they do. If you want something a bit special, there are better restaurants in the area. Anyway the service was good, the price was reasonable and they had the Champions league final on in the restaurant, much to the disappointment of my Spurs loving friend. We rounded off the evening with tea whilst watching the  penalty shoot-out and a chinwag back at our place. 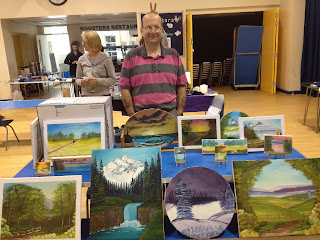 Sarah started the Pug this morning and the engine was sounding and feeling very lumpy. Another light appeared, this time the engine management one. So it was off the the garage after shopping, where it was tested it on his diagnostics box. It came up as a faulty Crank Position Sensor. Obviously us giving the car a shakedown after it had been in storage for so long has shown up a few niggles. The sensor is being replaced on Wednesday, along with a list of other things. It is only a minor fault but cars are too complicated these days and it only takes a rogue sensor to make the engine run like a pig. He reset the lights, mainly because the car was going 'ping' every few seconds and it was rather annoying. The car is still driveable, but it it does stall occasionally.

On the way back from the dealers we popped in to the local craft fair, where our friends were helping to run it as well as selling some of their wares. I collected an engraved glass I had ordered, and generally mooched about and had a chat. Then we stayed for the raffle which had a huge amount of prizes, none of which we won. This afternoon was spent nodding off and a bit of gardening, clearing the weeds out of the raised bed. The weather is nice its just a pity we can't take full advantage of the Pug until it gets sorted on Wednesday.

Until next week then....