First of all success! After 4 weeks The Pug 206 CC has been repaired and is back home with us. No wonder it ran like a pig, the cam belt had slipped a notch so it would never run correctly. Anyway after a days driving  around everything seems ok so far...Fingers crossed.

We got up in time for the man from the alarm company to come round and perform his annual service on our house alarm. We are thinking of upgrading so he is putting a quote together. That is not to say the existing one is faulty, it works fine but is getting on a bit and it would be nice to have some modern tech installed. 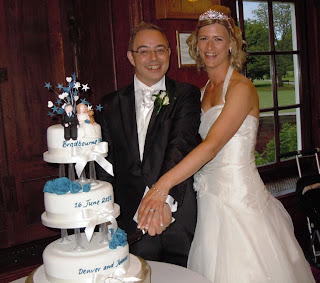 We went into town for a bit of shopping, then to Dobbies for lunch. This afternoon I had two things planned, gardening and recording a radio show for DWR. Which one I did first was dependent on the weather. As we got home it chucked it down, so I recorded a show. Then as I finished that the sun came out, so I cut down the front and rear jungles. Tonight we are off to Denver and Jo's wedding reception in East Malling. I'm looking forward to it as we'll be socialising with the Astro club crew, very good friends of ours. The Bride looked lovely, The groom seemed to have a permanent smile on his face. They had a great day. From experience the day of the wedding goes in a flash. You spend your whole time mingling, socialising and ensuring you make conversation with everyone there, plus eat, drink, cut the cake and dance. I liked the venue. Bradbourne House was your archetypal stately 'ome, the panelled walls festooned with portraits of  previous occupants from down the centuries. Apparently they come back to visit, there are stories of hauntings....... 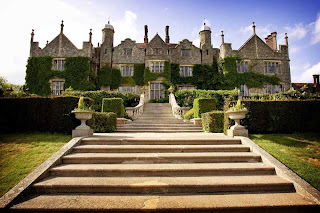 We have booked lunch at Eastwell Manor. It was a christmas gift from Sarah's parents, and it is always welcome! After shopping and washing the Pug 206 CC, we changed into our finest and made our way to Eastwell. After a drink at the bar and a peruse of the menu, we were showed to our table. Starters - Salmon fishcake for Sarah, potted shrimps for me. Lovely. Main Course - Scottish Roast beef and Yorkshires for Sarah, Guinea Fowl Supreme with potato Gnocchi for me. Two things I've never really had before and they were delicious! We both had Eaton Mess for dessert which was again delicious, then we retired to the bar for tea and coffee. If you have never been and want to give yourselves a treat I recommend Eastwell manor for Sunday Lunch. At £25 a head it sounds expensive but for 3 courses of high quality food with first class service and surroundings its not too bad. Oh yes and because it was Fathers Day they gave me a miniature Jack Daniels. which was ok by me even though I am not a father!

We popped into the psychic fair where Manky was peddling his paintings to collect something we bought from his Kleenezee catalogue. There were some strange goings on there. Apart from the usual Tarot, Mediums and Crystal ball gazing there was some fella waving his hands over a woman on a bed , then he did the same thing with a feather. There was also an Aura photographer, with a gadget called a  Biofeedback Imaging Colour Spectrometer. I'll let you decide what you think these things do. I'm not convinced.

After saying our farewells we drove back home (top down on car as well!), then I spent over an hour recording the second half of my show.