Well it is the start of a long break, we are not due back at work until next Tuesday week so we have a lot planned. Including a Birthday BBQ, a trip to Birmingham, then a wedding in Chester! 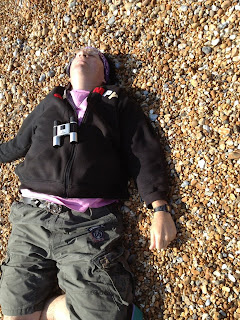 We had arranged quite a while back to go to the Folkestone Air Show with friends. So after a quick trip into town we made our way to James and Kat's place (The Admiralty) where the others were gathering. It was great timing as the bacon butties had just been made as we pulled up outside. A fifteen minute walk and we were at the seafront, and after finding a place on the beach we set up in plenty of time for the first air display. We had forgotten one important item, Sun lotion! It had been cloudy on the way down but as we hit the beach the clouds cleared. There was quite a delay between the displays and some of us had a bit of shut-eye in between (pic) . After watching a procession of different aircraft doing loop the loops etc.. and a great display by the Red Arrows and the Eurofighter Typhoon, we packed up and made our way back to the Admiralty. It was then that I noticed how sunburnt I was. I was red raw.  One of our lot seemed to be a lot worse off. He went on one of the fairground rides and that, coupled with too much exposure to the sun meant he didn't hang around afterwards. A quick cuppa and Jaffa cake later and we were saying our goodbyes. We dropped off Dave and Tina then ordered some Chinese grub. After all that sun and food I was zonked out. 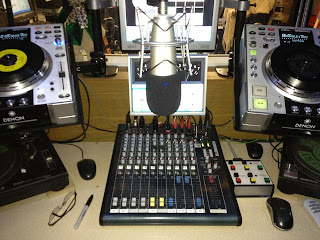 I woke up feeling very sore, the sunburn has really kicked in. It has been years since I last got burnt and it was agony just to shave this morning. We went shopping for the barbeque we are having tomorrow, then we drove up to Bexley to visit my Parents. My Mum was coming down tomorrow but she has picked up a nasty cold so we had to go there to collect Sarah's birthday cards. We also picked up a gazebo from Argos and some Strawberries and Pimms from Morrisons, then it was back home. After dinner I drove down to the DWR Studio in Deal to record a show for Wednesday night. I am sitting in for one of the regular guys who is taking time out for a while. It was great to get behind the microphone again. Its been a while since I was last on the air down there.