This week I was given  a courtesy car for a day whilst mine was in having warranty work done. For a basic motor it was bristling with tech. There was a scrolling bargraph display showing how much fuel I was using. A rear facing camera came on when I put it in reverse and there was this annoying little indicator light that told me when to change one of the six gears. Back in the old days my first car had an AM radio and windey-up windows. No power steering, central locking, airbags, traction control, antilock brakes, air con, trip computers etc.. I wondered how we managed back then.

We had to go to my parents place to collect a keyboard for somebody, so it was a good chance to visit Dartford and call in at my brothers. Dartford doesn't get any better. I blogged last year that the town was dying on its arse, there seems to be little improvement. Apparently Mary Portas was supposed to visit this week as part of the 'Portas Pilot Scheme'. She never turned up. The only improvement I saw was an extension to the '99p Store'.  That says it all really. After lunch and a chat at Brothers place we stopped at a well known haberdashery/homeware chain to get a curtain pole. They didn't have the one we wanted. We collected the keyboard from my parents, did some food shopping for tonight and was home in time to cook dinner for the masses. Home made Lasagne with minced STEAK, not Shergar, and very nice it was too. 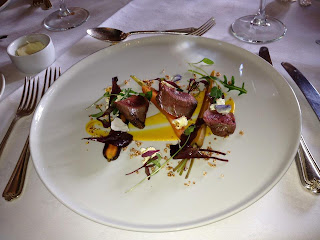 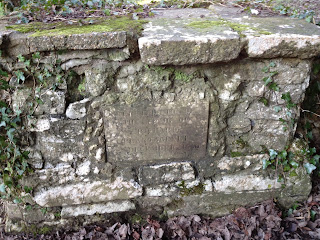 After the weekly shop, including a rather unsavoury episode in Sainsburys, we got ourselves suited and booted for lunch at Eastwell Manor. We had a Sunday lunch gift token from Christmas to use. The food and service was top notch. I had Pigeon breast salad with carrot puree, very nice and a first for me. Not sure if the added popcorn enhanced the dish though. Then it was roast beef with all the trimmings including a delicious red cabbage, cooked with redcurrants. Dessert was a Choclate Fondant with Tonka Berry ice cream. Probably the best I've ever eaten. I had to look up Tonka berries when I got home. They are used in cooking in France and the rest of Europe and have a Vanilla/Cinnamon extra flavour. Apparently it is banned for human consumption in the US as there is an ingredient that can be harmful to humans, but only if you eat a bucketload. The same can be said for Nutmeg, which is poisonous in extra large doses and yet we eat custard tarts with it sprinkled on all the time, so what do they know?
Afterwards we drove down to St Mary's Eastwell to visit the reputed tomb of Richard Plantagenet. What with his old man being in the news lately the place has become a focal point for visitors. Whilst there we saw a man doing some brass rubbing, not quite a good description because the tomb is stone but you know what I mean.