I had today planned out. First stop of the day was to Ashford Model Centre via Tesco to collect the railway layout boards, then B&Q for the materials to build a frame. The weather was good so I set up the workmate in the garden ready to build. My carpentry skills are severely lacking, I don't really do wood. But hey ho I had a crack at building a frame for the Sundeala boards and you know what, it actually came out ok. I'm pleased with the results, and I enjoyed building it. Now all  I have to do is lay out the Track mat, and the track. I'm just waiting for some more track to arrive via ebay.
So after dinner I decided to fit the track mat. Easier said than done though after sticking it down I realised A) it was wonky and B) there were creases on it. So tomorrow I'm removing it and starting again. I just hope the double sided tape lifts ok. When its finished I'm hoping it looks a bit like the image above.

Blimey I watched 'Casualty' for the first time in years. Who would want to live in Holby!. Within the space of a couple of hours there was a multiple car crash, a big gas explosion and a nasty chemical cloud all caused by the same bloke. Phew! We decided to stay up and watch  Die Hard: with a Vengeance. I like the Die Hard series, lots of explosions, mindless violence and unbelievable storylines......In other words good fun! 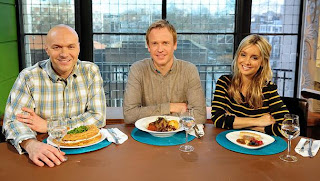 It must have been the late night because we didn't wake until about 8:30. We were still in Asda by 10am though Then we had to go over to Kingsnorth to drop off a pet cage we borrowed from one of Sarah's colleagues. I finally put away the Christmas lights in the loft, even though we took them down on friday they were sitting in the lounge waiting for me to put them away. After a nice lunch we sat down to watch 'Something for the weekend'. I have liked this show since it started. Being live there is always that element of danger, and I like the laid back mix of cooking, witty banter and good guests. Now I hear the BBC are ending it in March. Why do they always chop the popular shows and carry on with shows that should have been put down years ago (see Saturday above).
Then it was off to DWR for the first show of 2012. I actually had some feedback today via a listener, all good as well. It makes me happy that people appreciate the music we play. It means I must be doing something right.
Now after a really nice dinner we are settling down to watch a bit of Dancing on Ice and later, Sherlock. Probably one of the best TV shows on the box at the moment.