Not Stargazing Again and the Six Million Dollar Cat. 28-29 January.

It has been one of those weeks. On Monday we were told that Arnie had been found semi conscious in our neighbour's garden. After he was rushed to the vet, then to our own vet he was diagnosed with a broken front right leg and ruptured diaphragm. He has now had two operations to repair the damage and he is fighting on bless him. As you can see from the photo he looks a bit bald at the moment, he may even lose his leg if there is nerve damage, but cats can adapt. Trust us to adopt a Cat who likes playing chicken with cars. 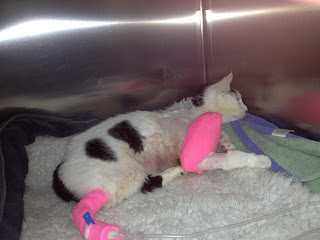 We had another Stargazing Live event to attend. This one was arranged by Natural England and taking place at Wye Downs. I was asked to give my talk on Radio Astronomy, so I really didn't need the cold I currently have. After a good lunch at the Blue & White Cafe we went to see Arnie. The poor fella seems to be off his food so Sarah cooked him some fish, which he sniffed at and refused as well.
Soon after we got home Andy turned up so we loaded the car with the PA system and telescope and set off for Wye. Yet again the weather was against us with clouds and rain. So we were confined to the Restaurant which, with nearly 100 people in there was a tad cosy! The evening was a success though with Ashley from SEKAS starting the evening with a great slide show and talk. Then it was my turn, and that went OK. I then seconded Jason to do a quick planetarium talk which covered for the lack of stargazing. We finished about 8pm and after packing up and saying our goodbyes set off for some food courtesy of McDs. Then it happened.......The clouds cleared. It always occurs when we have a pre-planned event. However Natural England want to hold another Astro event soon, and this time we will make it absolutely clear that people have to book it in advance. As some of our followers (members and non-members) were disappointed at not getting a ticket, thinking they could just turn up on the night. At least they didn't miss any observing! 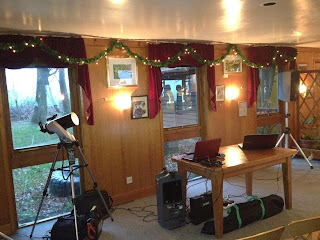 I wake up early with a sore throat and snotty nose. The cold is into day four. We did the usual early shop, then it was home to clean the aquarium. A job that I don't relish but has to be done.  I had planned to go to a model railway show in Thamesmead today, but the cold has put paid to that. I just want to veg out in front of the TV and maybe later start building my railway station. I had managed to pre-record a show for DWR today. So there won't be a live show until next Sunday.

Until next weekend then....