We decided to eat out for brekkie today. Normally Saturday morning consists of cereal and toast, but having some free drink vouchers for Dobbies that ran out at the end of the month we thought 'Why not?'
Actually we didn't need them as drinks were included in the price, they also had a 2 for 1 offer so a six piece English with toast and tea came to £5.95 for both of us.
Whilst chowing down I had the car washed. With all the dirt cleaned off it has revealed a large scratch on the bonnet that I obviously did when clearing the snow off a few weeks ago. I reckon some T-cut will hopefully clear it. They also had a clearance sale on 'Spot on' kitchenware, so we came away with a tea caddy and a lasagne dish. 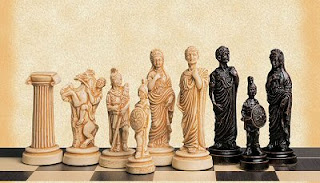 We decided to go to Canterbury for an Ornament hunt, specifically a Country Artists Bird of Prey,  and I needed some new undercrackers. After purchasing said garments we visited our usual department store which had one ornament on display but we didn't like it. We went to another department store and  came away with a Roman figure Chess set instead. On the way back to Ashford we stopped off at Bybrook Barn for yet another ornament hunt. They did have one we liked but it was over £200, Ouch. I did see this though, a £100 cuddly, full size Sheep. I'm sure there is a demand somewhere but I can't think what you would need one for.... 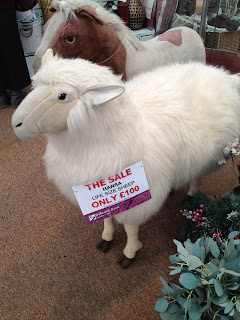 After a spot of DIY (putting up shelves) we got ready for tonight's event. It is round three of 'Dine in with friends' and we are off to High Halden for a spot of dinner and fun hosted by Julie and Andrew with Dave, Tina, Kat and James. The others arrived at our place, as we are going in convoy and it gave Kat a chance to see Arnie. We had so much food tonight. There was loads of garlic bread, dips, and Chicken Fajitas rounded off with Black Forest Gateaux and Bakewell tart. Lovely!  Then we played a few great games of Dirty Minds and Uno Extreme, where in one extraordinary game I went from 21 cards to 3 in one round, and went on to win. We always have a good laugh at these events, and even now Sarah and I are planning what to serve when it is our turn again.


Had a bit of a lie-in this morning, but we were still up and dressed by 9:30 and off to Asda. On the way back we looked at new lighting for the wall unit, and after seeing the price of LED decided to repair the existing ones. We also nipped into the curtain shop opposite the DIY store. It would be good to get new ones as the living room ones were there when we moved in over five years ago. I received a call from John. Today is the last show on Dance Web Radio as he is closing the station for a while. Ironically the Server in the studio is now playing silly buggers so it is highly likely there won't be a live last show today, which is a shame. We consoled ourselves with a trip to the outlet. Every time we go there things change. Shops close, others open and its usually my favourite ones that shut down. Yes I mean you Goldsmiths.

So farewell for the time being to Dance Web Radio. It is the end of an era and I have thoroughly enjoyed the past 18 months playing music that I love to listeners from all over the UK and the world, From Ashford to South Africa to Canada. To John, Phil, Russell, Gee, Darren, Steve, Mick, Dave, Dean, Gareth, Terry, Roy, Thom, Mitch, Toast and Lee as well as our international contributors Artii, John M and Yum Tum....Its been a pleasure working with you guys and I'm sure we'll be back in the near future.