We have a busy one this weekend. I woke up this morning feeling a bit down in the dumps. I read some stuff on Facebook last night that saddened me. The radio station that I've been on since the start in 2010 is shutting down for a while whilst the proprietor re-thinks his strategy for the station. After speaking to him today I can see where he is coming from. There is a lot involved in running a radio station, and he was virtually doing it on his own, with the help of a few others. Something has to give when there is hardly any revenue coming in and all your spare time is taken up. If you are a regular listener, why not think about a donation? I know in these austere times it seems a bit of a cheek to ask, but if you like what we do and want us to continue, a few quid would help us keep the station going. 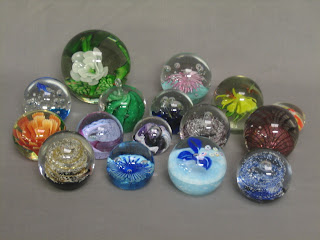 We had arranged a visit to Sarah's cousin. She had offered us a choice of Caithness Paperweights that were left by Sarah's late Aunt and Uncle.  We came away with a really nice one that will stand pride of place in our new wall unit. After a quick visit home to see Sarah's other Aunt, who had come to visit Arnie, we went to Tenterden to look at stuff to put on the wall unit. We came away with a Royal Scot Rose bowl to match the vase we already own. We popped into Biddenden on the way back to see the owners of Clarices and tell them the sad news about Sarah's Aunt and Uncle. We were disappointed that they no longer run a tea room there but they still had some Caithness pieces, and we came away with a vastly reduced perfume bottle. They specialise more in Moorcroft pottery, which is incredibly expensive. They have a vase in there that costs £1500, that's ONE THOUSAND FIVE HUNDRED POUNDS. and that's not the cheapest. Strewth!


Tonight we went out for DL's Birthday bash in Chiquitos Rochester. It was good to catch up with VPR friends and we had a good time. However.............. The service was snail paced, one hour between courses is not really acceptable. The food was uninspiring. The air con had thrown a wobbler meaning the place was like a fridge and we were also put by a draughty fire exit. To their credit they did give us free hot drinks. The sizzling chocolate dessert didn't, and we had to wait for a replacement at about 11:40pm. They have just opened one of these in Ashford. I hope its better than the Rochester one! 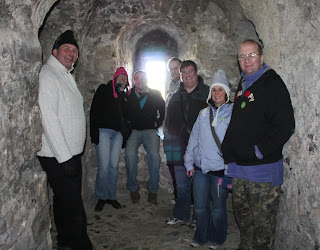 We were up early for the drive to Dover Castle, via Folkestone to collect Steve and Lukey. We arrived at the Castle well before opening time, but that meant we were one of the first in and parked right by the entrance. We met up with Batty, Manky, Tina, Julie and Andrew soon after and started our visit with a tour of the Hospital and Operation Dynamo tunnels. Excellent they were. Then after a spot of lunch in the freezing cold overlooking Dover we went into the castle for a look around. again that was very interesting. Whilst in the gift shop we decided to join English Heritage. What a palaver! They cocked up the refund of the entrance fee and ended up debiting Sarah's card again instead of crediting it. Then after refunding that we were still £32 down and they couldn't work it out. It took them half an hour to sort it out. By then we had to leave for Deal so missed the look around the Roman Church. Maybe next time. We did have a great time though and we are looking forward to the next event.
After a very good radio show we collected a Chinese takeaway on the way home. Now that's all eaten its time to relax. Its been a busy weekend!