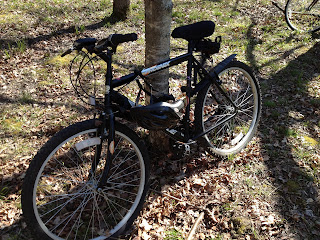 Its the day after Good Friday, and yesterday I did something that I haven't done since I was a teenager. I went on a bike ride with friends through the countryside to Orlestone Forest near Hamstreet. We covered about 15 miles there and back, including a stop for a crafty half pint in Shadoxhurst.  I thought I wouldn't be fit enough but I surprised myself by cycling up Singleton hill without getting off and pushing until the very top. The others were going at just the right pace for me. We are not Tour de France material, so I felt fine covering that distance. My trusty steed (pic) hasn't been that far since I bought it 8 years ago and was absolutely fine. The weather was fantastic and  I must say I thoroughly enjoyed it. I'm really looking forward to the next one. 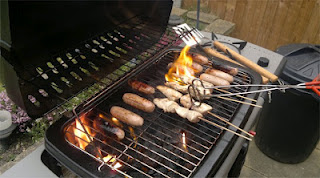 I'm glad I had a bath last night to soothe away all the stiff muscles from the previous days bike ride. I woke this morning feeling fine. The same couldn't be said for some of my compatriots, who were suffering from buttock related ailments!
Anyway we got up in plenty of time this morning. We had planned an all afternoon barbeque, with Parents coming down and friends popping in. We first went to Tenterden to buy a couple of nice directors seats from the Garden centre. Then after a trip to Asda for the food and a quick tidy round, the first visitors arrived, just for coffee. My Brother and Sis-in-Law had been to the London Beach Hotel down the road for an overnight with friends and they called in on the way home. Then soon after they went Mum and Dad turned up, I started cooking about 1pm and the first food was consumed by 2pm. Then Dave and Tina turned up. Luckily I cooked more than was needed so there was some left for them. After watching a shambles of a boat race we bid farewell to the Parents and then settled down to a DVD, 'Paul' which Dave hadn't seen before. Then just as that ended Chippy and Sam turned up with their entourage, and the BBQ was fired up again for round two. We also lit the Chimnea, and Dave, Chippy and myself spent time around it stoking the fire and putting the world to rights. So with the food eaten, puds consumed and drinks drunk, the masses bid farewell and we settled down for the rest of the evening, after tidying the kitchen of course. 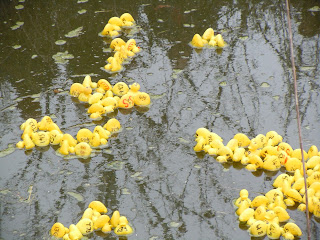 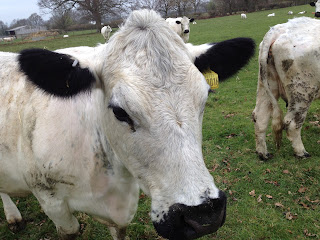 Having enjoyed last year's Easter Sunday so much, we decided to meet up with friends again for this years Smarden Duck Race. After a good breakfast of cereal and toast, we were picked up by Dave and Tina and set off for Batty's Farm, where we were meeting with Jason and Family, plus the Brighton contingent. The weather forecast was not good, it was bucketing down earlier so wellies were the norm. After a quick cuppa we trekked to the Village and met up with Dave's colleague en route. Again it was busy this year, and we were lucky to get ducks as they were running very low and were rationing people to one duck per person. The only change from last year was the visit to the pub. Some of us (me included) begrudge paying nearly £4 per pint of local beer, and of course some of us are on a serious health regime, and  beer contains empty calories.
So after another race lost (The postman won the special duck race) it was back to the farm where the Barbeque was dragged out and we were joined by Lukey, Kat and Sidney the Dog. There seemed to be a never ending supply of sausages and other meat products. The more adventurous amongst us sampled the Nando's hot sauce I brought with me. Now I reckon that the heat is spot on, but Charlotte's friend put WAY too much on his bangers and was suffering a bit. It was nice to have something that hadn't come from a cow, pig or chicken, and Batty's mum brought out some Jacket potato slices that went down a treat. We then had a walk down to the Duck pond, on the way meeting some of the Lambs including 'Tripod' a Lamb that doesn't use his back leg. The Cattle came over for a nose, and we generally made mooing noises and tried to pat them. But cows don't seem to be too touchy feely.  Then after a tidy round we said our goodbyes to Batty and drove over to the other fields down the road where Dave and co will be camping this year. He gave Dave the combination for the padlock on the gate but no matter how he tried the combination would not work. So that meant everyone had to climb over the gate. I decided to give it a miss until someone pointed out that the gate wasn't actually locked, the chain wasn't around the post and Dave had missed this. Oh how we laughed. After a stroll around, including spotting some HUGE Koi in the pond, we set off for home. Tomorrow is bank holiday Monday, but the weather is supposed to be pants and we may even stay in, or find something to do that involves indoors.

Until next weekend then.
Posted by Steve Jackson at 20:14