Supplemental - In Defence of the Turntable 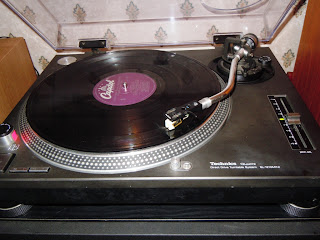 When I first got into Hi Fi back in the 1970s, my Dad bought me a Sony Music Centre which comprised of a Garrard SP25 Mk IV Turntable, FM radio and Amp in one package, with speakers. I loved that Hi fi, and only got rid of it a few years ago when I moved house. I just could not part with it even though I never used it. I think the weak link in the system was the turntable. The garrard used an idler drive type system. A rubber wheel would touch both the motor spindle and in turn drive the platter. Turntables with this drive tended to suffer from terrible rumble, and if there were any flat spots on the wheel they would be picked up by the system as a 'bump' in the recording. Not good. In  the 1980's there was a certain amount of snobbery amongst the Hi-fi fraternity, in particular where turntables were concerned. It had to be belt driven, with glass or MDF platter, feature some sort of fancy suspension system, have a straight tonearm, preferably from Linn, Rega or SME , and fitted with a good cartridge. The Linn Sondek LP12 was THE turntable to own. They sounded fantastic, were upgradeable with exotic power supplies and suspension parts and they sold for silly money (and still do!) even on the second hand market.

One turntable that was probably used by most DJs and radio stations but never mentioned in Hifi circles was the Technics SL1200 series. This unit defied all the parameters mentioned above. It was direct driven ( the platter was coupled directly to the motor, rather than belt driven via a pulley), it had an 'S' shaped tonearm, with a detachable headshell and the cartridge was designed to withstand some serious abuse. The whole deck is a design classic, A workhorse bit of kit that was first manufactured in the 70's and only ceased production in 2010.

Now I have just bought a Technics SL1210 Mk2, secondhand to replace my belt-driven SEE Revolver with Linn arm and Cartridge. No competition some people may say, but you know what?  The SL1210 knocks spots of the Revolver, having fitted the Linn K9 cartridge to it. The Bass is tight, Accoustic damping is there in abundance and there is no sign of rumble, something the snobs said you would get with a Direct Drive turntable. The Torque on the SL1210 is amazing, it runs up to speed in about 1/4 of a turn as opposed to seconds on the Revolver. Want to change speed? push a button on the 1210, On the Revolver stop the deck, move the belt from the lower to the upper pulley. Swear when the belt falls off the rim of the platter. Replace belt. Repeat process. 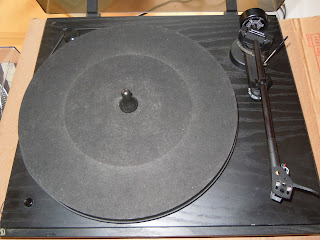 The amazing thing is that some people are turning their backs on MP3/Ipods and the like. The sound quality of these is not all that brilliant, unless you download the high quality ones. Also there is nothing like playing vinyl, you have something tangible for your money, instead of a digital file. You can read  the sleeve notes and admire the sleeve art, and generally you tend to listen to the whole album in the correct running order, as the artist/producer intended, rather than picking or playing tracks at random. I noticed that record companies are latching on to the growing popularity of vinyl and are releasing some albums on this format, as well as CD and download. I even saw some classic and new albums in a well known department store (Never knowingly undersold!) that were sold as framed art, along with the record. Mind you at £20 each you would be better off scouring eBay and record fairs for mint copies.

The other problem is finding the equipment to plug into a deck and allow you to listen. Amplifiers these days no longer have a dedicated 'phono' input, which needs to be sensitive enough to amplify the relatively small voltage that a cartridge produces. You can buy phono pre-amplifiers. I have one myself, with the added bonus of a USB output for transferring the vinyl analogue signal to a digital format. Most turntable spares can be found online, along with cartridges, stylii and record cleaners (very important, you don't want fluff on your needle pop pickers!)


I want to see the vinyl format still supported, even today young people have no idea how to play a record. They have no clue about 33 1/3, 45, 78, Tracking weight and anti-skate and Moving magnet or moving coil pickups. It would be a shame to assign this technology to history.

By the way, if you would like to purchase my SEE Revolver, with Linn Basik Plus Arm and K9 Cartridge, contact me via Facebook, or wait until I put it on eBay and place a bid...