Excuse the Shakespearean pun in the title, but I've been dying to use it and this weekend seemed appropriate.


Boy it was hot last night. I reckon that tonight we'll probably have the fan on in the bedroom, something I never normally do because the noise disturbs me.
We went into town this morning, Sarah bought a few clothes and I bought a new lock for the shed, exciting huh? We popped into Iceland to get a few salad bits, there was a very strong smell in there... and I mean REALLY strong, and it seemed to be coming from this little old lady. she must have been having serious gastric difficulties.

This afternoon it was so hot that we spent it indoors watching 'Cool Runnings' on the TV and eating ice lollies. We were planning a barbeque, but our friends weren't too sure they could come. So we will have one tomorrow. It was Chinese food tonight instead. This evening we sat outside and tracked Bats with my detector, then watched the ISS fly over.

I recorded X Factor tonight. Why did I bother you ask? They showed some cheeky chappie who worked in Nando's and sung a Louis Armstrong tune...badly. Stick to burnt chicken mate. Then there was a girl who looked like Pink, dressed like Pink and sung a Pink song. When the judges said she was too much like Pink (except for the voice which was pants) she went off on one, assaulting a cameraman and trashing scenery. Staged? Of course it was!
Even the ones who could sing were annoying. I think there was one girl who showed promise. she sang her own composition, which was actually quite good. Get her off the show and into a record contract before they ruin her career. Mel B was the best judge on there. She pulled no punches and you could see some of the auditionees looked a tad upset at her comments. Good. These wannabees need to be told they are no good. I know very talented  musicians who work their butts off, performing live in pubs, clubs, theatres and festivals who will never get a record contract because its 'not what the public wants', which is a shame. So will I be watching it next week? I should not like it but I find it compulsive viewing. 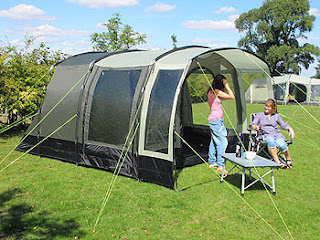 It was hot again last night. We had the fan on in the bedroom which made it a bit more bearable, but the noise meant I was waking every half hour or so. Still, must not complain. Remember only a few weeks ago it was chucking down with rain every day.

After the weekly shop we set off in search of tents. Last weekend we were told of a place near Wildwood in Herne. Having had a look at the ones on display we asked if there were any offers, only to be told we were a week early for the sale but they could do us a deal on a couple. So we ended up buying the one in the picture, along with a carpet and footprint groundsheet. I bought an LED wind up lantern as well. I reckon I'm just about prepared for Batcamp next weekend.

We carried on to Herne Bay, and through it. The place was packed to the rafters and there wasn't a parking spot to be had anywhere. We then headed for Whitstable. The queue of traffic into the town was horrendous so we gave that one a miss as well.  Must be the weather...

We got home just in time for the ice cream van to pull up down the road. 99s were the order of the day and very nice they were as well. Tonight we sparked up the barbeque, just for us two, and after a fine meal of lamb chops, bangers and salad followed by strawberries n cream, we settled down for the evening.