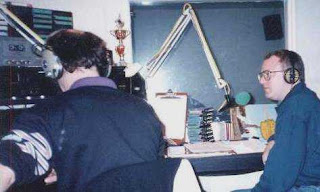 1994 and my 'debut' with Allen Taylor
Check out the carts top left!


Firstly I have a bit of an announcement to make. Most of my readers know that since 1994 I have been a presenter on Hospital radio in Dartford. First at Radio Joyce Green, and when that hospital closed in 2000 we set up Valley Park Radio at Darent Valley Hospital. Since moving to Ashford in 2006 I have been finding it increasingly difficult to juggle my time between my membership requirements and my other commitments. My weekly show is the only time I have been there. To this end I have recently Joined AHBS in Ashford as it will be easier for me to commit my time. The station is on the 'up' and I want to be part of it. So now is the time to 'Hang up my headphones' at VPR. My last show will be on 30th August. It has been an absolute pleasure to be part of the team there. I have made some great and lasting friendships, which I hope will remain. I will still have contact with VPR as I aim to retain associate membership. I want to know what is going on behind my back. I will have to dedicate a blog to some of the stand-out moments from the last eighteen years, of which there have been many.

We were shopping early today, making the most of the last early opening of the supermarket due to the Olympics. Once completed we headed off to Teston Park for the kite festival. The Badger contingent are camping there so we thought we'd pop down to see what this kiting lark was all about. 'Not a lot' as it transpired. The weather, although glorious meant there was a distinct lack of wind, which a kite needs to get lift. There were other activities including tasting Manky's homebrew
(most palatable) and taking part in his new found hobby geocaching, which seemed to have plenty of converts. I also brought down the solar telescope, which attracted some interest. After a most pleasant afternoon We said our goodbyes and headed back for Ashford. After a bit of dinner we settled down to watch the Olympic closing ceremony. It started a bit dodgy, but soon picked up and I thought it was brilliant. I did miss a bit though. Just as George Michael came on, and I swear it has nowt to do with him. I suddenly felt ill. Next thing I know I was talking down the great white telephone. It was like a scene from the Exorcist! I don't know what I've picked up but its knocked me sideways!