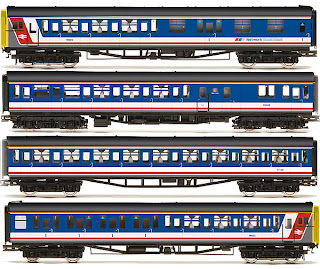 I slept well last night, that was until the cats decided it was a weekday and tried to wake us at 6am. Cats don't do weekends.
First stop today was to get the rear number plate re-fitted on Sarah's car. As is the norm the garage where we got the car had bodged it with not sticky enough sticky pads, so it was hanging off. First place we went didn't do roadside repairs, but I did pick up some wiper blades as mine were knackered. A quick trip to MC motors to get it screwed on was in order, although the mechanic (who bore a passing resemblance to Ray Winstone) had some extra sticky double sided stuff which he assured us would do the trick. We gave him a couple of quid for sorting it.
Then, as we were on the same industrial estate I went to the model shop. I was planning to upgrade the railway to digital, as my christmas pressie was a digital train pack (pic). I came away with a controller and two free digital (DCC) boards so I can upgrade my existing locos. We then popped into town for provisions, including a visit to the new Tesco Express in the town centre. If it brings more people into town then it can't be a bad thing, but Tesco already have two supermarkets and an express in Ashford. Overkill maybe? After a nice coffee and cake in County Square we joined the traffic queues out of town.
I fitted the new wiper blades, and had a chat with one of the neighbours. Apparently she is a convert to 107.1 AHBS Radio as well, but didn't realise she could receive it in Singleton even though her car radio receives it in Tenterden. The afternoon was spent in the garage fiddling with the railway layout. I also exercised my soldering skills converting my Javelin HS1 to digital. Luckily the Flying Scotsman was DCC ready so it was just a case of plug the DCC board into the socket and watch it go.
The time flew by and before I knew it was gone 5pm. We were supposed to be at a quiz night in Dartford, but I couldn't get a team together and it seemed a waste of petrol going up there without a team. We had a very nice home made Lasagne though , and a  glass of wine or two to wash it down. After 'Strictly' I went back into the garage for another few hours tinkering with the railway, Then watched 'Kill Bill Part 1' on BBC2. There's nothing like a bit of mindless violence  to end a Saturday night.

I slept very badly last night. I think it must have been the strong coffee I made. I must stick to decaf. After the usual Sunday shop, and lunch, we nipped out to get some Fireworks for the party in a couple of weeks. The past couple of years we have got them from 'Homeplus' and this year was no exception. We bought a large box, plus a huge rocket. I think we are going to have a big display this year. Then we went to Dobbies for our monthly free hot drinks. Christmas is in full swing there, and we decided to get a new fibre optic tree as our current one is looking a bit sorry for itself. It has a definite 'lean' to it and looks a bit knackered now. We have had it since 2005 and it was cheap back then.  The rain hasn't stopped all day, so doing anything in the garden was out of the question. I have a load of slabs to break up and they will have to wait. So it was back to the model railway when I got home. I tried out the the new train pack. After a few teething troubles I got it working ok.