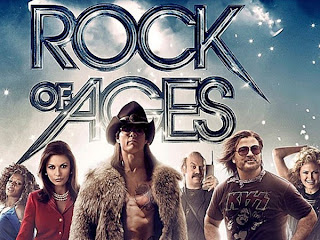 The plan today was to collect a load of rubble from my parents place. Luckily Manky and Batty had volunteered to help out. I picked them up early then headed to Aylesford to collect the Hilux, then on to Crayford for a spot of breakfast at the Bubble and Squeak Cafe, and a look round Maplins. After the rubble was loaded we then delivered it back to my garden in Ashford, dropped off the fellas and took the pickup back to the dealers. It was nice to see that they (Beadles) had cleaned my car as well.
Julie and Andrew came round this evening for a drink and a chat. It turned into a bit of a film night as we had bought some new dvds this afternoon. We ended up watching 'Rock of Ages', a musical featuring all those 80's rock tunes that were a soundtrack to my twenty-somethings. I enjoyed it. It was a no-brainer, harmless fun film. I wouldn't mind seeing the stage version. 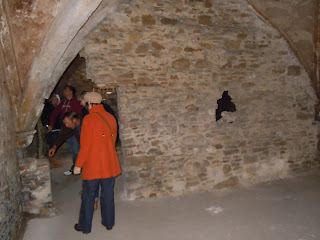 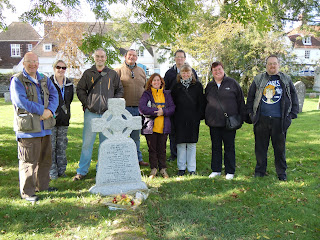 I got up early to watch the Korean GP. I should have stayed in bed really, it won't go down in history as a classic race. After shopping I decided to fit the new back door mat. It needed to be fitted in two parts as one side has a few angles in it to fit in with the wall and unit. I cut a template out of cardboard, which I thought would fit. I need to measure it again...
This afternoon we headed off to Winchelsea to meet up with the clans for a trip around the town's cellars. These medieval vaults are a feature of many houses in the town and the local archaeological society arrange tours. As this was the last one of the year the turnout for the event was huge, so they had to split us into three groups. One of the residents took a picture of us from his bedroom as even he hadn't seen so many people. After a good talk about the history of the town performed in the middle of the road with the use of a chalked out coastline, our designated tour guide took us into the first of three cellars. Two were actually used to store wine (their original purpose). The third was three linked cellars which looked more like a church vault. At the end of the Cellar tour the guide offered us a quick tour round the church (St Thomas) which was very interesting as well. We finished the afternoon with a well earned cuppa in the hotel. We said our goodbyes and headed for home where a menu from the local Chinese takeaway was awaiting us.