Yet another Astro Society evening was marred by clouds, although the guest speaker more than made up for it with a fascinating talk on astronomy and archaeology. I never realised Kits Coty, stones marking a burial mound near Aylesford, aligned with the constellations at certain times of the year back when they were first placed. 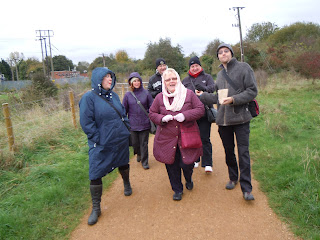 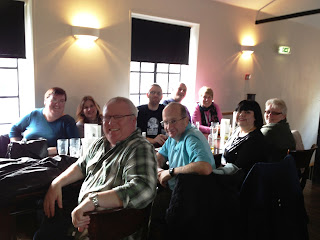 A  walk from Chartham to Canterbury, ending with a pub lunch. That was the plan for today. Andy arrived at our place and we set off for the station to meet up with other friends. After a twenty minute wait on the train we finally got underway, and were soon at Chartham. We were joined by Chip's mum and set off for Canterbury. The weather forecast was for cold and clear, not rain. It was raining. The surroundings however were lovely. Its a place we have driven past loads of times but never appreciated. The path follows the river, from Chartham, around the back of Thannington Without and Wincheap and into the City. As we arrived at the Foundry the sun came out. The pub was great, beer was brewed on the premises and two pints of 'Oktoberfest' ale went down well, especially with a half rack of ribs and treacle tart for pud. I wholeheartedly recommend this place. If you are ever in Canterbury check out The Foundry. Suitably replenished we headed back to the station via the high street. There was a stall selling hats and 'scraves' (according to the sign). Back at Ashford we said our goodbyes and went our separate ways. It was a great day with good friends. We always have a bit of a laugh when we get together, today was no exception.

Back at home I had a bit of a nap towards the end of Star Wars Episode IV, although I managed at last to see the bit where the Imperial Stormtrooper accidently bangs his head on the blown open door. Its only taken me thirty five years to spot it! We popped into Dave and Tina's to collect the banana beer for next Saturday, and Dave handed me a rocket, which was huge, bigger than the one I bought last weekend. Next Saturday's firework do should be a corker.

It was nice to have an extra hour in bed today. Its a pity cats don't do GMT.
After the weekly shop, which involved visits to two different supermarkets, I finished off a job I started a couple of weeks ago. The afternoon was spent in the Environment Centre attending the AGM of the radio station. Afterwards some of us adjourned to the pub for refreshment and an informal chat. I get the feeling these social events don't happen very often down there. That sounds familiar as at the other station I worked at the same thing happened. I'm not sure why, maybe its a combination of lack of funds, busy lifestyles or the fact that people won't make the effort to socialise. I always find that things get discussed more in  the open at the pub than round a committee table. I even managed to talk one of our presenters into maybe attending one of our astronomy meetings, as I heard him on the radio talk about the Mars Curiosity mission. Back home for dinner, and its a slow cooker special tonight, followed by an evening of TV.