I suppose its nice to have a quiet weekend in the run up to the season's festivities. There was nothing in the diary, no parties, get togethers, walks, or visits.

We went into town first thing. I needed a few bits n bobs. Whilst searching for bits n bobs we bumped into Julie & Andy, also shopping for bits n bobs. Back home we had a spot of lunch. I had been tasked with buying a new PA system for the Astronomy Society. I had seen one from Maplins that fitted the bill so the plan was to go down to the Folkestone branch and get it this afternoon. First off Sarah's Nephew phoned and asked if we could transport 'A few boxes' for him. When we got round there and he showed what he wanted shifting the term 'A few boxes' was an understatement. I dropped the back seats down and we filled the car with boxes. He also wanted a glass cabinet shifting (That one was sprung on us when we got there) but as time was pressing on we really had to get down to Folkestone. We got the PA system and speaker stands, and because I spent more than a certain amount they gave me £25 off as well, saving the Society some dosh.
We got home and watched 'Despicable Me', a very enjoyable animated film. The evening was spent with a crispy duck from Farm Foods, Sweet n Sour Chicken and a beer. Then we watched 'Strictly'...As I said it was a quiet one. 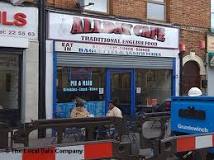 We planned to visit the parents today. I offered to take them out for lunch but they were already sorted, so we went into Dartford first for a look round the shops and a spot of lunch in the 'All day Cafe'. I used to go there years ago, when I lived up there. Nothing much has changed even the set breakfast (1) was still the same. They used to employ a very camp (and very hilarious) waiter, who sadly doesn't work there any more. I saw this guy on TV once during the general election campaign a few years back. He accosted William Hague outside the cafe and asked him if he wanted a taste of his little sausage.

Dartford town centre is still a shadow of its former self, although it was good to see the market had made the effort. We sat round at the parents place for an hour or two, had a cuppa and watched a bit of the Carry On film then left for home. An uneventful journey home, with a stop for fuel again. Then it was time to put the dinner on and write this blog. The evening will be spent writing cards.

As I say, a quiet weekend. Some would say dull.