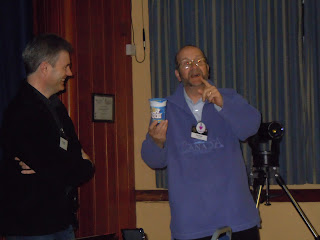 It has been a busy week. Every evening has been filled with one event or another, and was rounded off with a really good Astronomy Society meeting on Friday night. Josh gave a talk on 'New Horizons'. We presented Drew with a Pot Noodle for services to the Society (pic). Steve gave a great talk about Astronomers of note. Sarah won the constellation lottery. We had clear-ish skies so were able to get the telescopes out and most of our attendees managed to view the moon, Jupiter or the Pleiades. We even caught a glimpse of the Andromeda Galaxy, a bit of an achievement considering the poor viewing conditions. 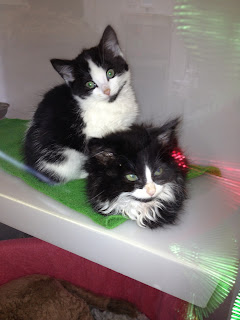 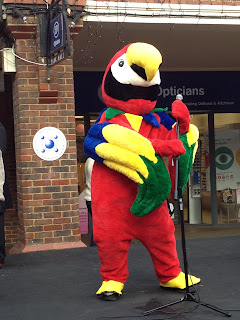 We had to be at the garage for 9am so there was only chance for a short lie-in today. The Pug has decided to revert to its original faults (various lights and warnings). The garage did a quick diagnosis but will only know for sure when they run it from cold. That means keeping it until Monday.
We went into town and as is the case every year we bought stuff for ourselves and no Christmas pressies. There is still plenty of time before the big day. I've been known to buy presents at 4:55pm on Christmas Eve.

We walked down to the RSPCA cattery for their Bazaar, which also meant having a look at the cats that are in residence at the moment. Lots of 'Awww' moments (pic). Anyway we won a bottle of plonk and some chocs on the tombola so it was worth a visit.
Then we headed to Park Mall where Webbo and Co. were hosting the lights switch-on. We also bumped into Julie and the O'latas. Luckily they had volunteers to wear the parrot costume for 'Find a Voice' (pic) so I wasn't needed. The afternoon was spent doing nowt, except watching old episodes of ST:TNG. The evening was rounded off with a Chinese takeaway, bottle of plonk (sadly past its best) whilst watching Strictly and ...Celeb. I managed to catch the end of Bad 25, a Spike Lee film about the making of Michael Jackson's 'Bad' Album. I need to watch the rest on catch-up as it looked excellent.

We seemed to spend the whole day driving about. Starting out at 10am from home-Asda-Currys/Pets at Home-Sainsburys-Home. Then Home-Town Centre-Home. Then Home-Sarah's Nephew-AHBS-Home. All I need is a 'For Hire' sign on top of the car and I'll be sorted.
In between that we decided to order our 'Christmas Pressie to Ourselves' online. What a palaver! We went through the ordering process, which took longer than usual because the John Lewis website was on go slow. Then card verification took ages, then decided it didn't recognise my password. So then we had to go through the whole process again with Sarah's card, which worked this time. The good thing is that our order is going to be sent to the local supermarket for collection, rather than the Royal Mail failing to deliver and dumping it back at the sorting office, which you can't park outside because of double yellow lines and over zealous wardens. We collect it tomorrow night. All will be revealed on next weekend's blog.