We went into town early today and first stop was breakfast at the Gorge. I managed to get most of the Christmas pressies as well. We were back home by midday. I decided to put up the exterior 'House-Bling'. It seems to have prompted all the neighbours to do the same. The lights were brought down from the loft. I actually packed them away properly in January, so they unraveled quite easily. The only problem is I seem to be missing one mains adapter. I seem to remember throwing away a faulty one last year. At least the remaining ones worked first time.
This evening we decided to go into town for a curry. Normally we would have cooked but we had nothing in, We don't normally shop until tomorrow. As we walked down the High Street we noticed Blockbuster were having a DVD sale so we had a browse, and bought 'The Artist' at a very reduced price. Another to add to the growing list of DVD/Blu-rays we purchased and haven't seen yet.


I needed a new pair of shoes. So after the weekly shop we popped over to the outlet. We bumped into Jackie and her other half. It was good to see her as she moved away a while back and the only contact we have is via Facebook. Anyway I finally found a pair that I liked.
After lunch we went over to yet another shop, this time over at Wincheap. They had exactly what we wanted so it was worth the journey. 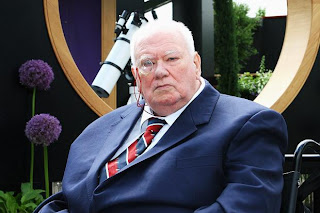 It was sad to hear that Sir Patrick Moore has passed away, aged 89. He probably did more to promote astronomy in the UK than anyone else. Did you know that 'The Sky at Night' has been running non-stop for 55 years, and Patrick has presented every one of them, including last Monday's episode. That's quite an achievement.   I was lucky to see him on a lecture tour a few years back. He enthralled the audience with his talk on the solar system, then after the interlude, during which he peddled some of his own CDs of Xylophone music, he took questions from the floor. I never got the chance to meet him in person, but a few of my fellow astronomy friends did three years ago and they said it was a memorable experience. He was an honourary member of the AAS, and his name appeared on our member signing in sheets, just in case he happened to turn up to one of our meetings. I think it says something about the man that all the tributes and comments I've read  have had nothing but praise for him. Farewell Sir Patrick, you will be sorely missed.