This week, I spent three days in Cardiff working at the airport, and to no avail apparently. When we left everything was working fine. Four hours later it all went wrong again. Oh well looks like another trip could be the order of the day....I also had my first physiotherapy session for my dodgy shoulder. I'm sure it is going to do me good in the long term, but I just felt that I had taken a good beating! 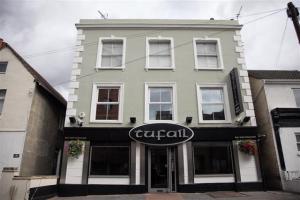 I was awakened early by Sarah, who suddenly said 'quick quick we have to get up!'. 'No we don't its Saturday!' I replied.  Turns out she was dreaming that it was next Saturday and we were going to London with Stevie and Co. Having spent the morning watching stuff on the box, I decided a trip out to get the car washed was required. The first place I went to was packed out, the queue was back into the road. So after a quick visit to the model shop for some railway bits we went over to a car wash behind Homeplus. They did a good job as well. At home, I spent the rest of the afternoon in the garage. Then it was time to head for Gravesend. Its my brother's birthday tomorrow so he had booked a table or two at an Indian Restaurant. He was a regular there, but it was the first time we had visited this place. The food was OK, although the service was pedestrian. We had the service charge deducted because of this and we didn't leave a tip.  We all had a good time though, although I have to say I preferred the last meal we had in the Gandhi.


It must have rained hard last night. The path round the side of the house was almost flooded. After the weekly shop we had lunch, then went over to Canterbury to buy some curtain poles. I notice some people on FB have been exercising their baking skills. Obviously inspired by Hollywood and Berry. I found some rhubarb in the freezer, so decided to make a crumble. Very nice it was too! There is loads of good stuff on the TV tonight, so I'll be in front of the box.