I left work early on Friday. The snow was quite heavy in SE London so I wanted to beat it home. I got back to Ashford and there was no snow until much later on. Mind you the disruption has caused me work complications. I am supposed to go to Cardiff Airport next week. Plan A was travel on Sunday to start the job on Monday morning then be home by Wednesday. Now Plan B is on. Travel to Orpington on train, get collected then drive to Cardiff, Start the job on Tuesday and hopefully be home late Wednesday night or stay until Thursday. Trouble is I won't know if I'm going until Monday morning, and we get the OK from the Airport.

We were supposed to be doing some radio training this morning, but there was disruption due to the weather so it was postponed. Instead we ventured into town. There was a 'Green Energy' fair on in County Square, basically energy saving hints and tips from companies. They had TV Weather presenter Kaddy Lee Preston there, and on the Ball Contractors stand Webbo was promoting stuff. We had a chat with John about radio stuff and talked to Matthew about Solar panels. Last year we tried to get them fitted for nowt, but we were blown out twice after being assured we were eligible. Now it transpires the prices have tumbled, almost half of what they used to cost. Its almost a viable proposition now with the price of energy rising.

After a nice lunch I spent the afternoon in the garage laying railway track, until I couldn't feel my toes any more. We had planned to go down to our friends for a curry, but they have had an outbreak of dreaded lurgy, so we have had to postpone it. We still fancied curry, so went to the Indian Diner in town. The food in there is good, I had a dish with Chicken Tikka and lamb meatballs in a spicy sauce. Sarah went for the Pasanda, which she found a tad too sweet, but it did describe it as 'Fruity' on the menu. Back home we watched 'Gremlins 2'. Not as good as the first one but still entertaining. 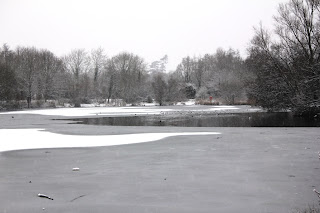 The real snow has arrived. I looked outside about 7:30am and it was falling quite heavily.  The roads are still clear. It looks as though the Highways Department have done their homework and gritted well before the event. We were in Asda first thing. Then I had to pop into the station to get a ticket for tomorrows journey. I didn't fancy the Monday morning queue although there was still a bit of a queue there. Its a good job the firm is paying for the ticket. 20 quid for a single journey, mainly because I'm travelling before 9am.
We had nothing planned for the rest of the day, so we watched 'Taken'.  A good film, must get to see 'Taken 2' now. Then we went for a walk around Singleton Lake. We fed a few Swans and Ducks, walked around the lake then came home. At 5pm I can report it hasn't stopped snowing all day. Tomorrows travel arrangements are looking decidedly dodgy!

Until next weekend then...