We got up early, thinking someone would turn up this morning to check on what the water company think is a leak. Apparently our meter is turning very very slowly when there is no water drawn, odd. Anyway he contacted us and said he would be round on Sunday. I recorded an interview Drew did for Radio Kent as part of Stargazing Live, then we went into town. I had to get a holdall for the PA system and get bits for tonight's Stargazing Live event. We had a good lunch in the Chinese Restaurant, they do a very nice lunchtime special. On the way back home we stopped to get the milk. Then I managed to get an hour or so in front of the telly before it was time to load up the car and head for Woodchurch. 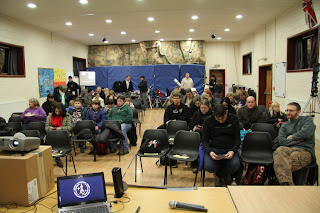 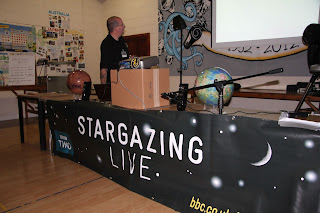 We arrived just after 4pm and everything was in full flow. Chairs were being put out, telescopes were being set up. It was a pity the weather was terrible. The forecast said sleet, it was drizzly, cloudy and cold. Not the ideal conditions for Stargazing. Still we had nearly 100 people turn up and they were treated to great talks by Drew (Space Rock Thingies) and Dave (Mars). The ladies (and Lukey) did a great job in  the kitchen serving up hot dogs, soup and drinks. I think the evening went really well. Hopefully next year we can hold it again, this time with better weather. Ironically when I put the TV on at home they were showing Armageddon, the subject of Drew's talk. Photos of the event can be found here.


We did the usual shop, then after lunch a work associate of Sarah turned up to check on our so called water leak. He couldn't hear anything in our pipes, I reckon its dribbling from the meter end.
I spent the afternoon in the garage, installing the layout for the model railway. Andy turned up to collect some bits, and he ended up helping me in the garage finish off the frame. After a nice dinner we are now settled in front of the box for the evening. Looking forward to watching 'Ripper Street'.