This week has been a bad one with regard to weather and travel arrangements. Blizzards on Monday and travel disruptions (Operation Stack) until Thursday meant getting home was a nightmare. It was good to wind down on Friday night with a game of Poker with good friends. 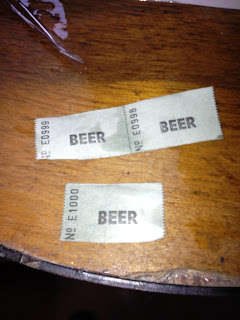 The plan for today was a visit to the Leas Lift beer festival in Folkestone. As I was about to get ready to leave home the doorbell rang. It was Andy, who asked if I had a spanner. He was on his new purchase, a Kawasaki 'Ninja' and the rear indicator was hanging off. I sorted him out and he was soon on his way again.

The weather today was terrible, this time last year March was very pleasant. We were walking along the Warren in sunshine. Today its high winds, rain, hail the lot. I met up with MB, Tina and Batty at the station, and twenty minutes later  Lukey met us at Folkestone Central. From there it was a short walk into town for a breakfast, at the aptly named 'Full English' cafe. Suitably refreshed we stopped for a couple of swift halves at the British Lion, where we met up with Lisa. Then on to the Guildhall, where Lukey thrashed me at Pool. I forgot he was a regular club player.

The walk down to the Leas Lift was, to say the least, interesting. High winds, driving rain and hail made me think my £100 plus waterproof coat was money well spent. Boy oh boy it was rough. The waves were crashing up the harbour wall. I didn't envy anybody out on the Channel today. The hail actually hurt my face.  Everyone attending the beer festival was crammed into the building at the bottom of the lift. It was cosy.  The toilet facilities were, as MB put it, Feral. The modesty tarpaulin was blowing about everywhere and the trough was swinging in the wind.

We purchased beer tokens (yes, really!) One token got you a very generous half pint. I had four, starting with a Hazelnut Coffee Porter (Nutty), then a Ramsgate No. 5 (gluggable) and finishing with two generous halves of Dairy Brewery 'Copper Top' (my favourite of the day). Lisa had her photo taken for the local rag, and MB thought it was naughty to press the button marked 'Do Not Press This Bell'. It had to be done.

The lift was not working, so I didn't fancy the walk back to the station, and by now I'd had enough beer. So I called Sarah to come and collect me. Soon it was time to say farewell to the others. On the way home we stopped to buy a new drinks fridge. I had been using a camping fridge in the garage. A few weeks ago I went to get some fruit juice from it and all the cartons were frozen solid. The thing had gone haywire.

This evening we ordered Chinese food. Normally I would eat the lot, but I only managed half of what I ordered. I was stuffed. The rest of the evening was spent snoozing in front of the TV. It has been a good Saturday.

The cats made sure we got our early morning call, I eventually got up about 8 o'clock to feed them and make a drink. Then after the shopping we set up the drinks fridge in the garage, then I snoozed in front of the Australian GP (Yawn). I hope the season improves. I started transferring CDs on to my portable hard drive. Its a long process that's going to take me ages.

We have a three day week next week. I really need some time off .

Until next week then