There's nothing like a few days off before the weekend. We spent Thursday in London. After a quick journey on the High Speed we arrived at St Pancras then headed for Knightsbridge via the underground.  First stop was Harrods. Both of us hadn't been there for over twenty years. We stumbled across the Chocolate room. Oh my,  I've never seen so much confectionery in one place. Sarah purchased some fudge after getting a free sample. She went a bit mad with the amount she bought but hey, we are in Harrods. We went to the cafe for a drink. The nice waitress showed us to a table and was trying to recommend the 22ct Gold Tea (Yes, tea with gold in it) at £14 a cup. Blimey the Cappucino was expensive enough at a  fiver! 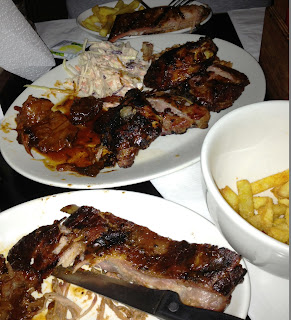 After drooling at the Rolexes in the windows of 'Watches of Switzerland ' we jumped back on the tube to Oxford Circus, then a short walk to our lunch venue, Bodean's. I have heard a lot about this place from friends and colleagues, and it didn't disappoint. The platter for two was huge, with loads of different BBQ meats including pulled pork, ribs, beef and chicken. Along with coleslaw and fries. Not the place for veggies, although to be fair there are veggie options on the menu! It was great food and the service was good. But the downstairs restaurant was a bit dark, the ambient light was so low I had trouble seeing what was on my plate, let alone being able to read the menu.


I needed a new bedside lamp. My one packed up this week, the touch sensitive base died. Luckily John Lewis had exactly what I wanted. Then we walked further down Oxford street to Selfridges, where I bought some more coffee pods for my Nespresso machine. We jumped on a bus to get back to Kings Cross. The traffic was horrendous. After 45 minutes we had only got as far as Warren Street. So we jumped off there and got the tube back to St Pancras. The travelcard was a worthwhile purchase. We could have spent more time in London, but decided to get home before rush hour started. Thank heavens for high speed trains. Only thirty seven minutes to get back to Ashford.


After the excesses of yesterday we spent some time at home today. First task was taking junk down to the recycling centre. As we were loading the car one of the neighbours came across to chat to us. He was genuinely upset, Their Cat had been put to sleep due to old age. Shame. Seventeen is a good age for a Cat. Then we took advantage of  no rain, or sleet, or snow to do some work in the garden. The mower fired up after a few attempts, and I gave the lawn a much needed haircut. Then it was off to 107.1FM AHBS to present the  'Hometime' show. It was great fun and went very quickly, there is so much to do in two hours the time just flies by. On the way home we picked up some Chinese food. It says something when the lady behind the counter in the takeaway knows your first name.

Woke up to reports of snow, although there is none in Ashford. We ventured into town, bumped into friends, did a bit of shopping, had a coffee then back home for lunch. This afternoon was spent watching the GP qualifying, and preparing stuff for this Friday's AAS meeting. Then we decided to do  the weekly shop. Saturday night was spent in front of the TV.

A bit of a non-event day really.

Its bitterly cold. We took the pug out to get the tyres pumped up. Sainsbury's supply free air and water. Other garages have the nerve to charge for a few minutes air. Be warned. I can't believe its nearing the end of March and I'm having to wear hat, gloves and my winter coat....Hurry up Spring!

After lunch I watched the Malaysian GP, then prepared dinner, Puerto Rican Chicken from Levi Roots cook book. Always turns out good. At least its only a four day week next week. Then Easter holidays.