This week, I have been mostly presenting on the radio. I did my usual Tuesday night request show, then stood in for someone on the Wednesday night request show. Its been a while since I did two in one week and I quite enjoyed it.  Since before Christmas I have been suffering with a trapped nerve in my shoulder. In January the doctor prescribed tablets and physiotherapy, and it seems to have done the trick. I had the last physio session on Friday and now the shoulder is a lot better. 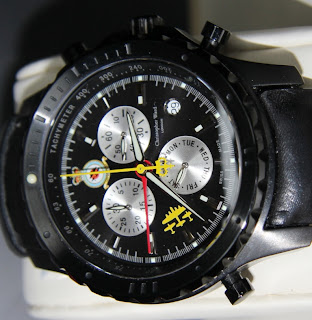 
We went to Canterbury this morning. I needed a new jacket for spring. I can't keep wearing the fleece, and the Leather one only comes out for best. I made use of a £5 off voucher with Debenhams and got a nice Harrington Jacket. After lunch, courtesy of Nandos, we did a bit more shopping then headed for home.
This afternoon I put one of my watches on eBay. I hardly wear this one and it just sits in its nice case ticking away, unused. I should get a reasonable price for it as its a limited edition. If you fancy a look here is the link.


I had a listen to Peter Young on Jazz FM. Its something I rarely do (I always forget he is on) and I really enjoyed the show. There was a great mix of Jazz and soul,  PY is a great presenter and has been at the top of his game for years. I used to listen to him on Capital Radio in the late 70's/early 80's. He was one of the better presenters on there until the likes of Pat/Mick/Dr Fox took over and bland formulaic playlists were the order of the day.

The evening was spent in the company of Friends. We listened to Wham's first LP (on Vinyl!) and chatted over drinks and nibbles. I gave them a demonstration of internet radio including a listen to one of Afghanistan's two pop music stations, and a listen in to the California Highway Patrol (CHiPs) scanner. They had pulled over a pick-up for having too wide wheels. Exciting huh!


After the weekly shop, we had a look through the Auto Trader website. We really need to change the Pug for something that is cheaper to run. We have decided to get another Yaris as Sarah liked the one we had a few years back, and we like Toyotas. There was one for sale in Gillingham, so I quickly phoned my Bruv to see if he had heard of the dealer. He was less than complimentary,  but offered to find one for us. Watch this space.

We popped out to B&Q where I bought a 4lb 'Cooking Hammer' for smashing up my concrete slabs . The afternoon was spent smashing up, clearing the old fireworks from New Years Eve (I hardly ever venture into the garden in winter!) and Sarah did the essential job of clearing Cat poo from the lawn. I don't do poo. We did find a dead bird as well, Cats will be Cats.... I then cleaned out about six months worth of crud from inside my car. Thats a couple of pounds worth of petrol saved!