I took a stroll down to the shops to get a paper this morning. Its something I don't do too often and really should do more as the walk is quite pleasant, and of course good for you and the environment. Dave turned up with his Van and we loaded the stuff for the Challock Goose Fair. Then we popped over to Steve's place to collect  'Dobbie' and the PST. After a quick coffee with Dave and a spot of lunch Sarah and I set off for the Singleton Environment Centre for our training from AHBS.
We have never been there before, even though its right on our doorstep. The walk took us through the Highland Park estate, where in 2005 we had planned to buy a new house. It was good to see the building works completed although I'm glad we didn't move there. The houses are on top of each other, very claustrophobic!
We arrived at the centre to be greeted by Daniel. We started with a presentation on health and safety, then Richard led us through responsibilities of broadcasting  as dictated by Ofcom. I noticed the cafe there looked good, and when we had a break some of us (not me!) had cake which they said was good. The tea was nice though. We finished about 5:30pm and walked home. We decided to order up a pizza. I like ordering online, and its the first time we had used Papa Johns. Very nice Pizza, especially when washed down with a glass or two of wine! We watched the second episode of Dr Who, which while i quite enjoyed, I didn't like the fact that the Doctor sent the baddie to his death. A bit out of character if you ask me. Then I finished of the evening with Last Night at the Proms, through the home cinema! 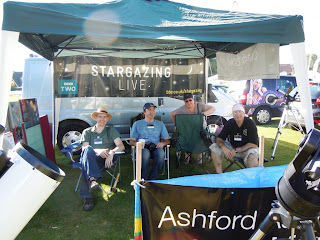 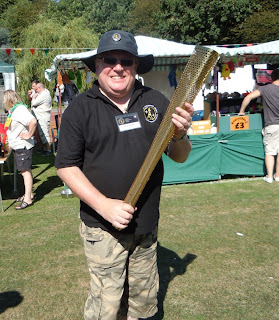 It was 5am and I was fast asleep when suddenly Sarah leaps about three feet in the air and dives out of bed. Apparently something had crawled across her head, that something being a large (and now squashed) spider. Of course I was expected to get up  and dispose of it. I gave it a 'Burial at Sea' then returned to my bed. 7:30 came round in no time and after a nice breakfast we drove over to Badger HQ where Dave was waiting in the street for us.

We arrived at Challock at 9am to be met by Dave(2) and his daughters who had brought all the stuff over in his van. We were shown to our pitch which was next door to KMFM. I was talking to the bloke on the stall and he rolled his eyes when I said I was a member of AHBS. I noticed that they hardly sold a goodie bag all day, whilst our stand was very busy. I wonder if it was something to do with the way they changed their format?
We were soon joined by Drew, then Denver & Jo turned up and stayed a while. It was nice to see a few of our members and people who are on our Facebook page. All in all it was a great day, plenty of punters, sunny, no cloud and the moon was visible until early afternoon. At last we had something to aim the telescopes at, as well as the solar scope. Highlights included:

Me and Sarah photographed holding an Olympic torch.

Dave picking up a kid so they could see into the PST then spending the rest of the day with sticky hands.

Drew and Dave having a 'Sun vs Moon' contest. The sun won.

Sarah winning cup-a-soups on the tombola.

Me winning a bottle of orange squash and a jar of coffee on the tombola.

The day was soon over and after packing up and heading for home, we had a spot of dinner and watched 'The Hunger Games'.

Until next week then.
Posted by Steve Jackson at 20:27