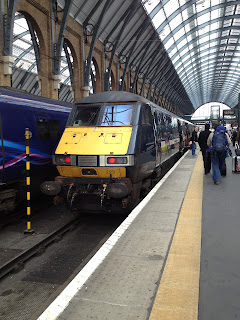 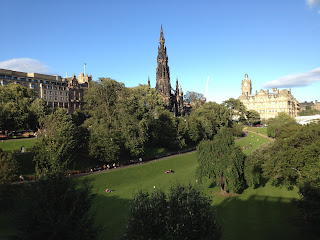 At last it was time for our long weekend break. This is something Sarah and I have done in the last three years and this year we decided to go to Edinburgh.
We booked a Hotel and train package months ago, and after dumping the cats at the the cattery we set off for Kings Cross via the Javelin, arriving in time to take our seats in First Class on the 11:30 East Coast service. The journey was good, with plenty of complimentary food, drink and Wi-Fi.  We arrived in Edinburgh on time and found the Hotel to be just opposite the station. The room was ok, clean but tired decor and yet again a tiny bathroom. The view was non existent, just scaffolding on the building next door. The hotel is going through some refurbishment which meant the lounge was closed, but the bar in the restaurant was open even though you had to sit at a dining table.
We went for a walk and found a nice middle eastern restaurant. After a set meal of starters, mixed grill with rice and veg stews,then baklava with ice cream we headed for the 'Real Mary Kings Close'. a 17th century street with houses that is now effectively underground as it has been built on over the years. It was featured a few years ago on 'Most Haunted' and I have to say I wouldn't like to be alone down there at night....spooky! 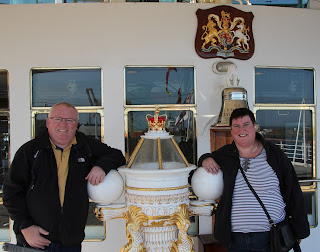 After a full 'Scottish' breakfast we first checked at the station regarding our return journey, more about that later. Then we boarded a tour bus to Leith where the Royal Yacht Britannia is moored.
If ever you are in Edinburgh I would recommend you visit that. It was really interesting and they have made a good effort in turning it into a tourist attraction. The bus trip back into the city was interesting too. We were pelted with sweets by the local kids, some hitting people on the open top deck. The driver did check if everyone was ok, then reported it. I suspect nothing will get done though.  The afternoon was spent walking around town including a trip up to the castle. We declined to go in though as it was expensive, and frankly if you seen one castle etc... We had dinner. Then as we walked out into the street I could hear a distant pipe band. The Edinburgh Postal band were celebrating 50 years and were performing down by the art gallery. We watched them march up and down the square with the swirl of the bagpipes in the air, it really captured the atmosphere of the place.


I was in the shower when the fire alarm went off. We threw some clothes on even though I was still wet. Then just as I got my shoes on, it stopped. Apparently someone (not us) had left the bathroom door open with the shower on, and the steam had set it off.
We had checked our travel details yesterday. There was engineering works between Edinburgh and Newcastle and our train journey would take longer as it went to Carlisle first, then on to Newcastle. Just how long we didn't realise until we got to Lockerbie. The train stopped, then waited nearly two hours while they finished over-running engineering works. There were problems further down the line, when passengers who had first class tickets on cancelled trains challenged us and fellow passengers about our seat reservations. We politely told them this was not their train and we had been on here since early this morning. I think the staff did a sterling job getting everyone sorted and ensuring we were fed and watered. Eight hours later we arrived at Kings Cross, then it was a high speed trip back to Ashford. OK so Sunday was not ideal, but all in all we had a good weekend, Roll on next years trip!

Until next weekend then.