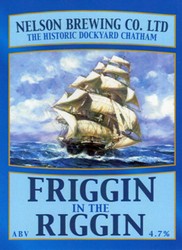 I was going to take the Naim down to Soundcraft to have the software updated, but I realised that I have to take the hi-fi apart next friday anyway so the new flooring can be laid. I can take it there then.
So we decided to have a trip to Canterbury. It was packed. The main reason being that there was a huge food and drink festival in  the Dane Gardens. After a quick look round the shops we headed for the festival. They always have an abundance of certain stalls at these fairs. Fudge, cheese, cider/apple juice, chutneys and venison sausages. We bought some local blue cheese, chilli BBQ sauce and some Italian pastries (Cannoli). Plus I had a swift half of 'Friggin in the Riggin' from the Nelson Brewery in Chatham. A most acceptable brew.

As the sun was making a valiant attempt to finish September with some pleasant weather, we put the roof down on the Pug and had a nice drive back to Ashford, apart from passing a rather stinky cess pit.
A quick stop at Farmfoods for Duck and other frozen food on the way home. Then after arriving home  I had to put all my trains back on the track after one of the Cats staged a major derailment. We had a call from Sarah's sister. Her PC was overheating and could I go round there and blow out the interiors. We went over armed with tools and a can of blower spray. It didn't really need much de-fluffing but it looks like the graphics card is on the way out, and that was confirmed later on when she phoned to say it had died. We will be off to PC world tomorrow. She came home with us and we had a blow-out Chinese meal, then watched the last Dr Who for the time being. It was a cracking episode, quite sad and even scary (The cherubs gave me the creeps) but now we have to wait until Christmas for the next dose of the Doctor. 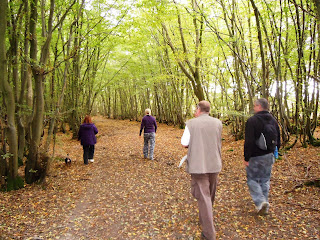 I received a message from Manky first thing. Would we like to go for a walk this afternoon just on the other side of Great Chart. I need a good walk, it was just if I could get there on time. So this morning was quite hectic. Collect graphics card from Alison's PC, food shopping, PC World, Family Bargains for storage boxes, drop off shopping, back to Alisons, Install new card, then Dobbies for free coffee and lunch. I finally arrived at the Hoodeners Horse at 1:15pm and met up with MB, Tina, Lisa, Earle and Fudge. A swift pint later and we were heading towards Daniels Water via Purchase Woods. The idea of the afternoon was to sound out the area for planting Geocaches (Surprise surprise). We did get slightly lost and ended up walking a complete circle around the woods which MB and I only realised when we passed a Farm that we had walked past earlier. We never got to Daniels Water though. On the way back they stopped to find a Geocache that had eluded them. As I was helping to find it as well I was logged on the cache. It was my first find. I am no longer a 'muggle'. If I have time on Friday I may have a look round Singleton for more.