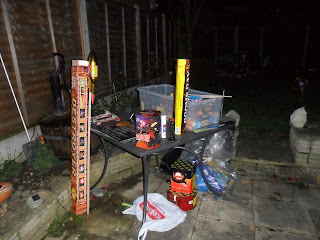 It was up and at 'em this morning. We had food to buy as were were feeding over thirty people this evening. First stop was the town centre to pay few bills. Then Asda, then home, then Waitrose to get the bits we forgot to buy in Asda. The afternoon was spent preparing Chilli Con Carne for the masses. After putting The spuds and sausages in the oven I managed to catch a few minutes watching the GP qualifying before getting the garden ready, while Sarah tidied round the rest of the house.
The first people arrived around 6pm. Then there was a steady stream of arrivals bearing all sorts of explosive devices until everybody was accounted for. The Mankybrew beer was sampled and the general concensus was 'I've paid for worse'. Actually it was very gluggable. We had the first round of fireworks until 7:30, then a break for food. We eventually finished around 9pm with a couple of huge rockets courtesy of us and Manky, then Chinese lanterns. All too soon it was over for another year. Some said their good nights, some sat indoors and chatted. A few of us sat outside by the warmth from the chimnea. We had the bright idea of burning the spent fireworks. All was going well until there was a big explosion of sparks, Obviously there was a UXD in amongst the dead'uns. The Rear Admiral, who was sitting next to it leapt from his seat like Usain Bolt out of the blocks. I'm still giggling about it now. Yet again it was a great evening with good friends and family. Oh yes and special thanks to Manky for the beer, Tina for the soup and Sam for the rocky road cakes! Same time next year folks.

The plan was to take Sarah's parents up to my Brothers place, via Bluewater. We got near the junction on the A2 and  the queue into bluewater was horrendous. So we decided to get some food for dinner in the local Asda and have lunch there. We had a chat and coffee round at Colin and Sarah's place. Back at home we prepared dinner for tonight. Then after roast chicken was scoffed we took the rest of the beer back to Badger HQ.  Now back home (again) and its time to put the feet up and watch telly after a busy but enjoyable weekend.