After spending a morning packing, herding cats and Doctors appointments we finally got underway about 2pm. Traffic was fine for a Thursday afternoon and we did the M20, M26, M25 and most of the M40 without any incident.  A quick pit stop at Oxford services and it was my turn to drive. The weather was closing in and we noticed a lot of flooding in the fields around the River Cherwell. By the time we hit the M42 it  was the west midlands rush hour. We crawled along past all the main junctions until our exit, Junction 9. By now it was chucking it down. The local news showed terrible flooding, as you may have seen on the national news. I hope this weather improves over the weekend. 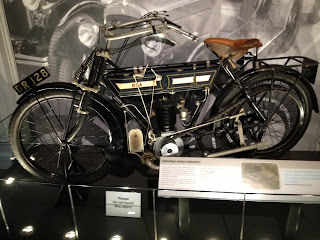 After brekkie we all decided do a bit of Christmas shopping in Wolverhampton. Why Wolves I hear you ask. Well it has a department store that Sarah likes. So we jumped on the train to New street, then a quick walk to Snow Hill and jumped on a Tram to Wolverhampton. The fares are so cheap here. I can't help wonder that if they reduced fares in the south east people would use public transport more instead of clogging our roads. Have you ever tried to get to Bluewater near or after Christmas? Its a bloody Nightmare. Anyway Sarah found the clothes she wanted. another present sorted. Then after coffee and a very mediocre sausage roll we headed back to the City and the German Market.
Whilst the market was all very picturesque and there was plenty of food, drink, sweets, trinkets etc to be had I couldn't help wonder if it was a tad overpriced. I was impressed with the look of the half metre sausage though!

We popped into the Museum/Art gallery and whiled away a couple of hours at an exhibition celebrating the people of Birmingham. Very interesting it was too. I particularly like the BSA motorcycle (Birmingham Small Arms don't you know) Circa 1911 and had a 1965 tax disc on it.

Back at base we sat down for a couple of hours rest then it was off to 'Buffet Island'. You guessed it a chinese buffet at a road junction. The food there is very nice. There is great selection of grub and you can even have it cooked fresh, if you want noodles or a pancake.

Tomorrow David and me are off to Coventry for a look round the transport museum. The ladies are doing more retail therapy.